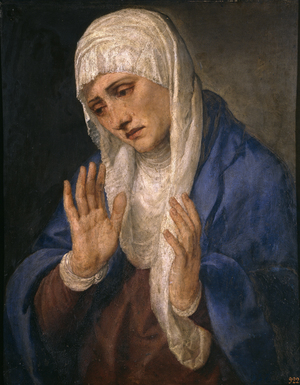 Stabat Mater is a medieval Latin poem in which the poet contemplates the sorrowing figure of the mother of Christ weeping at the foot of the cross and begs that he may share her grief.

It is based upon the prophecy of Simeon that a sword was to pierce the heart of his mother, Mary.

The text originated in the 13th century during the height of Franciscan devotion to the crucified Jesus and has been attributed to Pope Innocent III, or more usually Jacopone da Todi who is generally considered to be the real author.

The Stabat Mater has long been part of the ‘Stations of the Cross’ devotions.

Since the 15th century, composers have made musical settings for use in the liturgy while later composers, such as Rossini and Dvorak, have made more expansive concert versions.