German bands hit the world in their thousands during the 19th century and, as if there was something in the water, they all seemed to come from the same small area in Germany. Although forgotten today, German bands were frequent visitors to New Zealand's shores too, from the 1850s right up until the outbreak of World War I. Musicologist Samantha Owens and Shelley Wilkinson introduce us to some of these touring visitors and follow them around New Zealand.

Bandleader/composer Rudolf Mersy conducting his fellow internees on Matiu/Somes Island. Mersy and his German band were among the first Germans arrested in New Zealand in August 1914, just a couple of months after World War I broke out. Image: National Library of New Zealand, Hart, Roger. Ref: 1/2-112230-F collection, photographer unknown.

Thomas Beecham made the comment that “during the nineteenth century German musicians had played the greatest role in English music.” Far away, on the other side of the world in New Zealand, Germans formed the second largest immigrant group after the British. Around 10,000 Germans settled in this country between the early 1840s and the start of World War I: this must in turn have had a significant impact on the burgeoning NZ musical scene. Samantha Owens wondered about this too and did some investigations.

Matiu-Somes Island, where Rudolf Mersy’s German band and others were interned for four plus years, is positioned in the middle of Wellington harbour.

The Jolly German Bands was presented by Samantha Owens and Shelley Wilkinson. It was produced and engineered for Radio New Zealand Concert by Shelley, the narrator was Peter Sledmere and the early 78 recordings of various musicians were either kindly loaned by Peter Dalley and Paul Downie, or were from Sound Archives Ngā Taonga Kōrero. 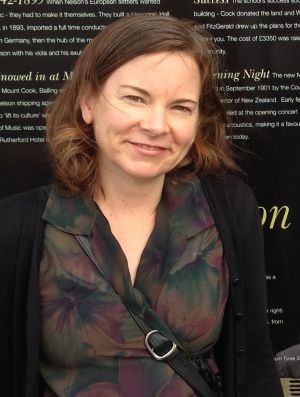 Samantha Owens is a historical musicologist now based at Victoria University in Wellington.