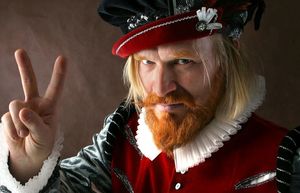 Gently comic episodes in the life of 75 year old Hartley Manners - a grand actor of the 'old school'.

Matthew O’Sullivan has had an extensive career as an actor, director and writer in the UK, NZ and Australia. He has numerous film and television credits including Melba, Rafferty’s Rules, and Water Rats. His theatre experience is vast, including numerous roles in Shakespeare’s great tragedies.

Grant Tilly had a long and varied career, including 30 years in Wellington theatre where he was involved in 170 productions as actor, designer or director, as well as playing 28 different roles in film and television since 1972. He also appeared in many plays broadcast by Radio New Zealand. Tilly is perhaps best remembered for the film adaptation of Middle Aged Spread and Carry Me Back. He is often associated with Roger Hall, appearing in many of his plays including Glide Time, Middle Aged Spread, Bedtime and C'mon Black.

"The best roles I've done are these New Zealand roles - they're roles written by New Zealanders for New Zealanders. Those are the ones that I remember and cherish,"