The two Micronesian atoll chains which make up The Republic of the Marshall Islands, named for an eighteenth century English sea captain, have an unhappy record of interference by foreign traders, missionaries and blackbirders and domination by large nations.

In the 1940s the demoralised Marshallese, forced to live under Japanese military administration, had to face yet another onslaught when World War Two turned their islands into battlefields. By 1944, US forces had driven out the Japanese at huge cost. The two years of warfare, in which one in every ten Marshallese died, was described as "the bloodiest ever seen in the Pacific". After the battle for Kwajalein, buildings had been reduced to kindling and not one tree or shrub remained alive.

A new "Trust Territory" but American bases and nuclear testing

In 1947 the USA and the UN Security Council signed an agreement putting the "Trust Territory of the Pacific Islands" (most of Micronesia, including the Marshall Islands), under the wing of America. The UN mandate required the USA to protect the health of the inhabitants and promote their economic advancement and self-sufficiency. It also allowed the USA to "fortify" the islands. According to President Truman, military bases would be maintained "for the protection of our interests and of world peace... by arrangement consistent with the United Nations Charter".

The Marshall Islands were the Pacific Proving Grounds. Thousands of troops and their families were based at Kwajalein, headquarters for a missile range and 66 nuclear tests carried out between 1946 and 1958 on Bikini and Enewatak. The Marshallese had been shifted to other atolls but did not escape the effects of nuclear fallout. Radiation sickness, cancer, birth defects and similar afflictions became commonplace.

Over a fifteen year period, Kwajalein, Roi, Namur, Rongelap, Utrik and Bikini were seriously damaged or changed by military activities. Housing, sanitation and the like on other overcrowded atolls were severely stretched as Marshallese people sought a safe home.

After a 1975 referendum, the islands which had constituted the Trust Territory split into the separate states of Palau, Federated States of Micronesia, and Republic of the Marshall Islands. It was not an easy decision. Many people thought staying together would give them a stronger position in negotiations with USA, but the majority voted for separation with the hope of eventual self-government or independence. The three young states continued to consult and co-operate, but each stood alone in putting its case for compensation to the most powerful nation on earth, the USA.

Led by Amata Kabua, a senior iroij (chief), Marshallese ministers and officials fought hard for redress over issues such as the consequences of nuclear testing, people's rights to return to their home atolls and social and economic imbalance between wealthy US bases and poorly resourced Marshallese atolls. Over the years, more than $US 700 million has been paid in compensation for the effects of nuclear testing. Some of that has been invested by the Marshalls government, which receives some $US 40 million annually in rent and aid.

Eventual self-government and then independence

In 1979, the Marshall Islands became self-governing. In 1983, along with citizens of the other Trust Territory states, the Marshallese responded in three plebiscites to America's offer of a "Compact of Free Association". Although many on atolls most directly affected by military activity voted against acceptance, a majority was in favour. President Reagan welcomed the Islanders' decision to "take up your new status in the world as a sovereign nation" Perhaps bearing in mind the 3,000 American troops and support workers still living on the billion dollar Kwajalein Military Base, he ended his speech by saying "But you will always be family to us".

In 1986 the Republic of the Marshall Islands adopted a constitution which included a President and a Parliament (Nitijela) and achieved Independence under first president Amata Kabua.

2003 Some provisions of Compact of Free Association re-negotiated. 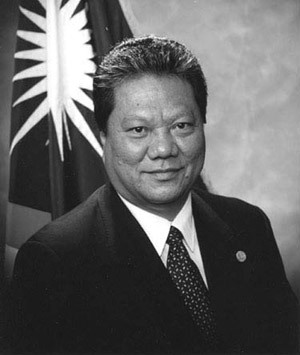