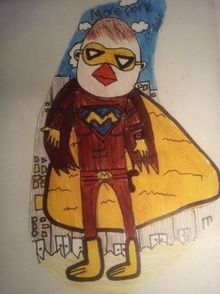 By day, Mark Masterson is a mild-mannered student, but by night he protects the city as the mighty masked hero 'The Morepork'. Akin to an underground comic, The Morepork is a cartoon-like series which mines the popular culture superhero genre, but with a peculiarly Kiwi twist.

Featuring Hayden Weal as The Morepork and Tim Gordon as the Narrator, with Heather O’Carroll, Tim Spite, Cohen Holloway, Jack Sergent-Shadbolt. Written by Andy James and read by Tim Gordon. Produced by Duncan Smith and Engineered by Phil Benge for RNZ.