When New Zealand’s first all-female hip hop crew, Sheelahroc, dropped their track ‘If I Gave U Th’ Mic’ in 2000, they were propelled onto the national stage.

The crew consisted of three members: Ladi6, Voodoo Child, and Tyra Hammond. They were rappers, writers, performers, singers, and MCs. In short, they were, as hip hop artist Randa describes them, “dope, talented woman.” 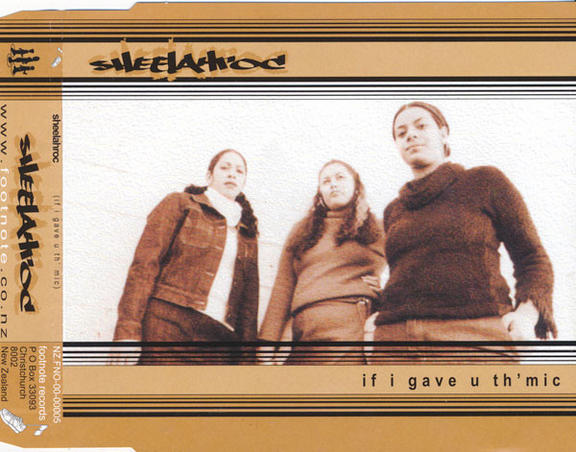 Artwork for Sheelahroc's 'If I Gave U Th' Mic' Photo: Supplied

Voodoo Child thinks back to the birth of Sheelahroc: “everyone else that was MCing the time that I was around were all male. But I heard from somebody else that there was another chick in Christchurch who was also writing raps.”

That chick was Ladi6. They joined forces, and soon after Sheelahroc picked up their third member, Ladi’s cousin, Tyra. The teenagers treated their band like a business, holding weekly meetings and even keeping minutes. The vision was clear. Ladi saw all-female rap crews overseas and wanted that same representation here in New Zealand.

“There are definitely attitudes out there that women should be a certain way,” Randa says, “like, gentle or low key. But when you see a woman with mad skills, you cannot deny the power there.”

When their single was released, New Zealand’s hip hop industry was sorely lacking in female representation. Radio stations across the country quickly discovered Sheelahroc’s talent and If I gave u th’ mic was nominated for a bNet music award.

Rapper and hip hop artist Scribe grew up in the same Christchurch neighbourhood as Sheelahroc. He saw a challenge in the all-female rap crews’ path to success.

“[Sheelahroc] made me kinda be like, oh, hang on, I’m going to get left behind here if I don’t get my shit together,” Scribe says.

This episode follows Sheelahroc from their origins through to their breakup. It explores female empowerment, the early 2000s hip hop industry, and unearths the terrible music video all the members thought (and hoped) was long lost.

The meaning of Sheelahroc is ‘Women are the Strength’ which signifies all that this group embody. The group formed in Christchurch in 1999 and consisted of females of various ethnicities with the aim to provide a supportive environment for females in what is a classically a male dominant Hip Hop scene.

Original band members were Karoline Tamati (Ladi6), Sarah Tamaira (Voodoo Child) & Tyra Hammond. In 2001, Sheelahroc released ‘If I Gave U Th’ Mic’ and won the award for the Most Promising New Act at the bNet Music Awards. Ladi6 was a consultant for this documentary series.

Ladi6 (Karoline Tamati) was born in Christchurch although she recalls her initial song writing memories began when she and her family spent a year in Africa when she was a teenager.

Ladi and her cousin Tyra Hammond and Sarah Tamaira started the band when she was just 16 years old. Once the band went their separate ways, Ladi met Brent Parks, a talented musician who she started the group ‘Verse Two’ with and who eventually she married.

Verse Two shared band members with Shapeshifter and they encouraged her to move to Melbourne where she collaborated with Shapeshifter on ‘When I Return’. Ladi has released three albums (‘The Liberation Of…’ was certified platinum in 2011), won a number of significant awards and collaborated with other high profile artists such as her cousin Scribe and Fat Freddy’s Drop.

Tyra Hammond grew up in Christchurch with her cousin Karoline Tamati (Ladi6) and formed the band Sheelahroc together. Once the band split, Tyra continued to make music after meeting Jeremy Toy, one of Opensouls core band members. Influenced strongly by funk, Tyra bought a fresh sound and the band created a side group named ‘Tyra and the Tornadoes’. The Opensouls continued to make music with Toy & Tyra doing the majority of the songwriting to compliment Tyra’s vocals. The band released two albums, Kaleidoscope and Standing in the Rain.

Sarah Tamaira also known as Voodoo Child was a member of Sheelahroc, an all-female band that started in Christchurch with a focus on including and encouraging the female Hip Hop artists to have a voice in what was usually a scene dominated by males. Their single ‘If I Gave You The Mic’ won the award for Most Promising New Act at the 2001 bNet Music Awards.