A family of Tamil asylum seekers detained on Christmas Island are not being considered for resettlement in New Zealand or the United States, despite Australian senior government ministers previously raising the option. 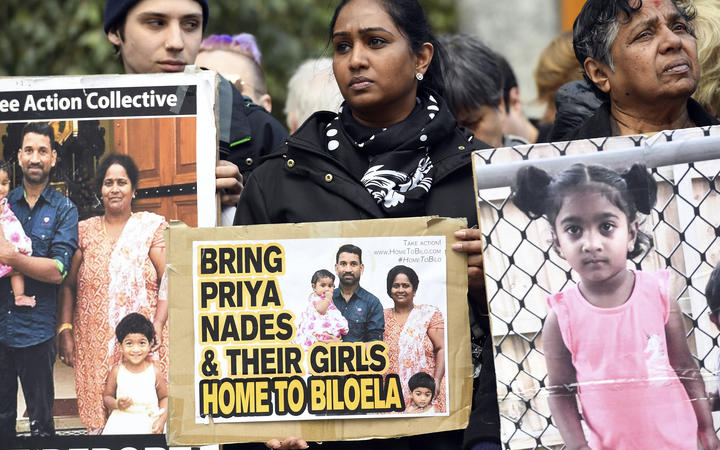 A protest outside the Federal Court in Melbourne on 4 September 2019, after a hearing into the case of the refugee family. Photo: AFP

Home Affairs Minister Karen Andrews said resettlement arrangements with both countries were only open to refugees, and the family was not legally considered to be refugees.

The family has been detained on Christmas Island since 2019.

They were removed from their home in the regional Queensland town of Biloela in 2018 by Australian Border Force officials after their visas expired.

The youngest member of the family, three-year-old Tharnicaa Murugappan, was flown to Perth Children's Hospital this week after experiencing vomiting, diarrhoea and dizziness for several days.

Andrews appeared to raise the possibility the family could be resettled abroad at a news conference on Tuesday, responding to a direct question on the family's future.

She has now sought to make clear that neither country was an option for now.

"In relation to resettlement options, the arrangements that we have in place with the United States and New Zealand are in respect to refugees," she told Nine Radio.

"This family does not have refugee status."

A legal challenge related to Tharnicaa's legal status in Australia is ongoing.

Andrews told Nine Radio she had "tried to be very clear" at the Tuesday news conference.

At that conference, when asked when the family would be released and if the government had discretion to make a decision on their future, Andrews raised the resettlement arrangements.

"We are going through the process now of investigating a range of resettlement options in relation to a number of different circumstances here in Australia," she replied to the question on Tuesday.

"I can't make public commentary on that at the moment because I don't want to disrupt those negotiations."

Prime Minister Scott Morrison then added: "And that applies across all cohorts, across all groups, not specifically."

Hours later, Foreign Minister Marise Payne directly raised the prospect of the family being resettled in the US or New Zealand.

"I understand that there are two options that are being looked at," Payne told Nine Radio.

"I understand the United States is the first of those, and that New Zealand is also an option."

However, the ABC revealed on Wednesday there had not been any formal discussions with the US or New Zealand about the family's future.

On Thursday morning, the home affairs minister sought to make clear that those options were not available to the family at present.

"The family does not have access to those two programs, because they are for resettlement of refugees," she said.

Asked if the foreign minister was wrong to raise the prospect of resettlement in either country, Andrews did not directly reply.

She said negotiations with New Zealand on broader resettlement programs were underway, and arrangements were already in place with the US.