Thousands of Thais participated in a run billed as an anti-government protest, in what appeared to be the biggest show of dissent against the government of former junta leader Prime Minister Prayuth Chan-ocha. 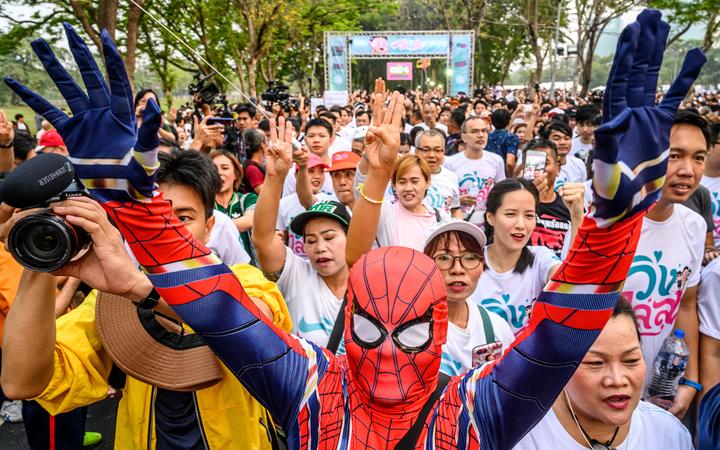 A man dressed as Spider-Man takes part in a "run against dictatorship" in Bangkok on January 12, 2020. Photo: AFP

Police estimated more than 12,745 runners showed up at a public park in Bangkok in athletic outfits and colourful shoes starting before sunrise to join the "Run Against Dictatorship" event.

Many shouted, "Prayuth, get out!" or "Long live democracy!" while running the 2.6km course amid a light presence of security forces. Some also gave a three-finger salute of resistance to authority, a gesture drawn from the film The Hunger Games.

"I want things to be better," said Bangkok resident Waraporn Waralak, 45, after completing her run. "I want Prayuth to get out."

Thailand's government is headed by Prayuth, 65, after an election in March 2019 that the opposition described as having been manipulated to favour the leader's pro-army party.

"This is the biggest gathering since the coup," said Anusorn Unno, dean of the sociology and anthropology faculty at Bangkok's Thammasat University, adding that the harmless nature of the activity had spurred greater participation than usual.

An excited crowd watched as organisers auctioned bibs bearing numbers significant in Thai politics, such as 2475, the Buddhist calendar year of the revolution that ended absolute monarchy in 1932.

To loud cheers, a bib numbered 0044, in reference to the former ruling junta's Article 44 that gave Prayuth absolute executive power, was ripped in two on stage.

The event was held in line with people's rights and no laws were broken, a government spokeswoman told Reuters.

The run followed a rally last month staged by Thanathorn Juangroongruangkit, the 41-year-old leader of the progressive Future Forward Party, who has emerged as the most outspoken opponent of Thailand's new civilian government.

Thanathorn was charged on Friday with breaching a law on public assembly over the December rally, and Future Forward faces dissolution this month by the constitutional court.

Sunday's event was called "Wing Lai Loong" in Thai, which translates as "Run to Oust the Uncle", in an apparent reference to Prayuth's nickname of "Uncle Tu".

It prompted a rival "Walk to Cheer the Uncle" event, held in another park, about 14km away, to show support for Prayuth, where thousands also turned out.

The clashing views of the two camps aroused memories of protests that periodically roiled the Thai capital before culminating in coups in 2006 and 2014.

Supporters of Prayuth, who as army chief, had led the 2014 coup, put nationalism on display by brandishing the Thai flag, while branding Thanathorn and his supporters "nation haters" for their liberal views.

They took turns hitting giant fruit pi+atas with a wooden stick, to symbolise frustration at the Future Forward Party, with an orange, for example, signifying the party's official colour.

Both crowds encompassed a wide age range, but Prayuth's supporters were older on the whole.

"We support the prime minister because he shows loyalty to the monarchy, our king," said Sorasak Katkonganapan, a 62-year-old retiree at the walk.