At least 99 people have died and another 200 are being treated in hospital after drinking toxic bootleg alcohol in north-eastern India, officials say. 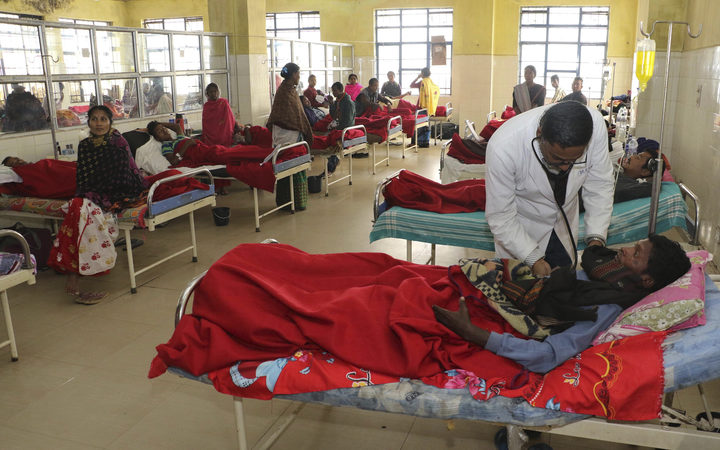 A doctor attends a victim, who had consumed bootleg liquor, at a hospital in Jorhat in the north-eastern state of Assam, India. Photo: AP

The victims of one of the most deadly bootleg liquor-related incidents ever in India were mostly tea plantation workers in Golaghat and Jorhat districts in Assam state, government official Julie Sonowal told the Associated Press.

The workers consumed the tainted liquor laced with methyl alcohol, a chemical that attacks the central nervous system, on Thursday and started falling unconscious. They were rushed to nearby hospitals and the death toll rose to 93 by Saturday, according to Assam Home Commissioner Ashutosh Agnihotri.

Himanta Biswa Sharma, Assam's health minister, said about 200 people who fell sick after drinking the toxic liquor are in hospitals, some in critical condition.

Manab Gohain, a doctor at the Jorhat Medical College Hospital, said 34 patients have died in the past 24 hours.

The owner of a local brewing unit and eight others have been arrested, police official Mukesh Agarwal said. He said police are pursuing other people believed to be connected to the racket as part of an ongoing investigation.

"We shall not spare anyone involved in the manufacture and distribution of the tainted liquor," Mr Sharma said.

Deaths from illegally brewed alcohol are common in India because the poor cannot afford licensed brands from government-run shops. Illicit liquor is cheap and often spiked to increase potency.