Saudi Arabia's Crown Prince has promised that the killers of journalist Jamal Khashoggi would be brought to justice, in his first public comments since the journalist's murder sparked international condemnation. 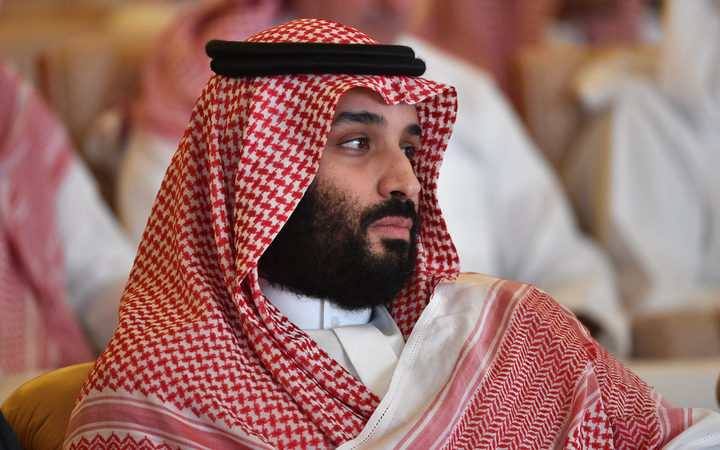 Crown Prince Mohammed bin Salman told a major investment conference in Riyadh that Saudi Arabia and Turkey would work together "to reach results" on a joint investigation into the killing.

"The incident that happened is very painful, for all Saudis... The incident is not justifiable," the crown prince said on a discussion panel. "Justice in the end will appear."

He described cooperation between Riyadh and Ankara as "special" despite fierce criticism from Turkish President Tayyip Erdogan and his aides.

Hours earlier US President Donald Trump, in his toughest comments yet, told the Wall Street Journal that the crown prince bore ultimate responsibility for the operation that led to the Saudi journalist's killing.

Mr Trump said he wanted to believe Prince Mohammed when he said that lower level officials were to blame for the 2 October killing at the Saudi mission.

But he suggested responsibility lay higher up: "Well, the prince is running things over there more so at this stage. He's running things and so if anybody were going to be, it would be him."

His comments heaped pressure on his close ally amid a global outcry over the journalist's death, and came hours before Prince Mohammed's appearance at the Saudi investment conference.

A number of high profile business and political figures have pulled out of the conference over the death of the journalist, a prominent critic of Saudi Arabia's de facto ruler.

Mr Erdogan spoke to Prince Mohammed and the two discussed the steps needed to bring to light all aspects of the killing of Mr Khashoggi, a presidential source said.

France has been relatively guarded so far in reacting to the incident given its close diplomatic ties with Riyadh and commercial relations spanning energy, finance and arms.

"As long as the facts have not been clearly established, and corroborated by our information services, we will not take any decision," said government spokesman Benjamin Griveaux.

"But on the other hand, once light has been shed on the matter and has been corroborated by our services, based on the hypothesis that Saudi Arabia's responsibility has been proved, then we would draw the necessary conclusions and impose appropriate sanctions," he said.

It was the first time Paris had publicly brought up the possibility of sanctions, although diplomats cautioned that there would not be any "hasty" decision and there were concerns over harming France's political relationship with the kingdom.

Griveaux added that any sanctions move would not solely involve limiting arms sales. He did not elaborate.

German Chancellor Angela Merkel called the killing a "monstrosity" earlier this week and vowed to halt German arms exports to Riyadh until the case is cleared up.

From 2008-17, Saudi Arabia was the second-biggest purchaser of French arms, with deals totaling more than 11 billion euros.

Meanwhile, US Secretary of State Mike Pompeo said in an internal email sent widely to US State Department employees that the US wanted perfect clarity on what happened to Mr Khashoggi.

"We are already seeing steps from Saudi Arabia reflecting serious accountability, but we won't be satisfied until we get perfect clarity on exactly what transpired," Mr Pompeo said in a "Miles with Mike" email sent to department employees and reviewed by Reuters.

In the email, Mr Pompeo said the purpose of his visit to the Gulf monarchy last week was "to impress upon Saudi Arabia's leadership the importance of determining what happened to Jamal Khashoggi."

An adviser to Turkey's president said Prince Mohammed had "blood on his hands" over Mr Khashoggi, the bluntest language yet from someone linked to Mr Erdogan.

Saudi authorities did not immediately respond to a request for comment about the remarks by Mr Trump and the Erdogan adviser but Prince Mohammed painted a different picture of relations with Turkey.

"There are now those who are trying to take advantage of the painful situation to create divisions between the kingdom and Turkey," he said.

"I want to send them a message that they cannot do this as long as King Salman is here, and the Crown Prince Mohammed bin Salman is in Saudi Arabia and the head of Turkey, whose name is Erdogan... this division won't happen."

Riyadh has blamed a "rogue operation" for the death of the Saudi journalist and said the crown prince had no knowledge of the killing.

The death of Mr Khashoggi, a US resident and Washington Post columnist, has sparked global outrage and threatened relations between Riyadh and Washington as well as other Western nations.

For Saudi Arabia's allies, the burning question has been whether they believe that Prince Mohammed, who has painted himself as a reformer, has any culpability in the killing, a possibility raised by several US lawmakers.