A huge fire has broken out at the National Museum of Brazil in Rio de Janeiro, the oldest scientific institution in the country. 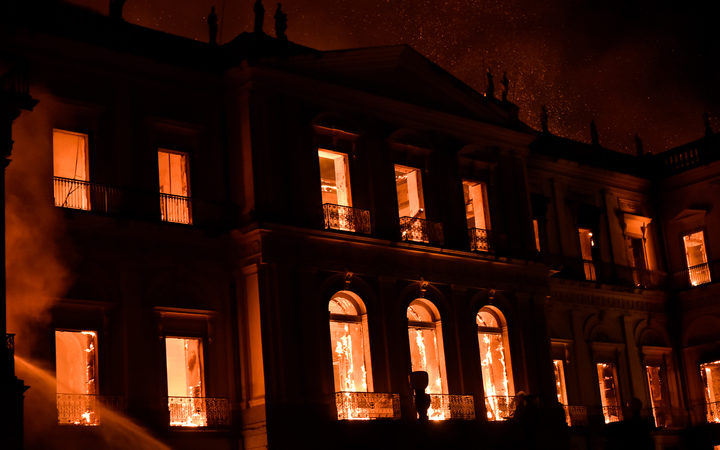 Firefighters are tackling the blaze at the building, which contains more than 20 million items in its collection.

It is not yet clear if anyone has been injured in the fire.

The museum, which once served as the residence for the Portuguese royal family, celebrated its 200-year anniversary earlier this year.

Images broadcast on Brazilian television showed how the fire, which is believed to have started after the facility had closed for the day, had spread throughout the building.

BREAKING: The National Museum of #Brazil in #Rio is completely consumed in fire. Founded in 1818, the museum is the holder of over 20 million items, including mummies, meteorites, insects, & fossils. So sad to see history in flames :(

President Michel Temer said in a tweet that it was a "sad day for all Brazilians".

"The value of our history cannot be measured by the damage to the building."

In an interview with Brazil's TV Globo, the museum's director said it was a "cultural tragedy".

The museum houses thousands of items related to the history of Brazil and other countries including Egyptian artefacts, according to its website.

Its natural history collection includes important dinosaur bones and a 12,000-year-old human skeleton of a woman - the oldest ever found in the Americas.

Employees had reportedly previously expressed concern about funding cuts and the dilapidated state of the building.