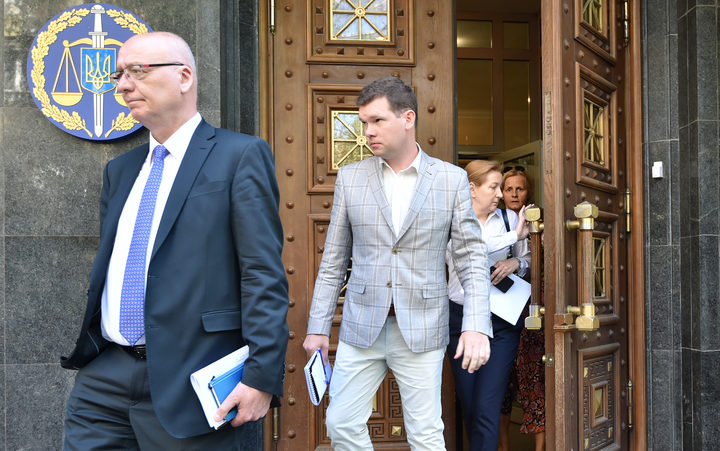 Diplomats from around the world leave Ukraine's General Prosecutor's office on 1 June 2018, after being briefed on Kiev's decision to fake a contract-style killing of Russian journalist Arkady Babchenko. Photo: AFP or licensors

Herman is said to have pleaded guilty and agreed to co-operate with the investigation.

He was accused of acting as the middleman between alleged contacts in Russia and a hired assassin in the Ukraine capital of Kiev.

Mr Babchenko, who is known for his outspoken anti-Kremlin views, escaped the planned assassination by faking his own death. The journalist was helped by the man hired to kill him and Ukraine's security services.

To widespread astonishment, Mr Babchenko, 41, appeared the day after his murder was reported to admit it had all been staged.

Relations between Kiev and Moscow are tense, with Russia having illegally annexed Crimea in 2014 and continuing to support armed rebel groups in Ukraine's east.

Oleksiy Tsymbaliuk, a former Ukrainian Orthodox priest, told the BBC earlier this year that he had alerted security services as soon as Mr Herman, a fellow Ukrainian, asked him to kill Mr Babchenko.

Mr Herman did not deny plotting with Mr Tsymbaliuk, but initially said he was also working with Ukraine's SBU security services and knew all along that the assassination would be faked.