French and British fishing boats have come to blows off the coast off northern France. 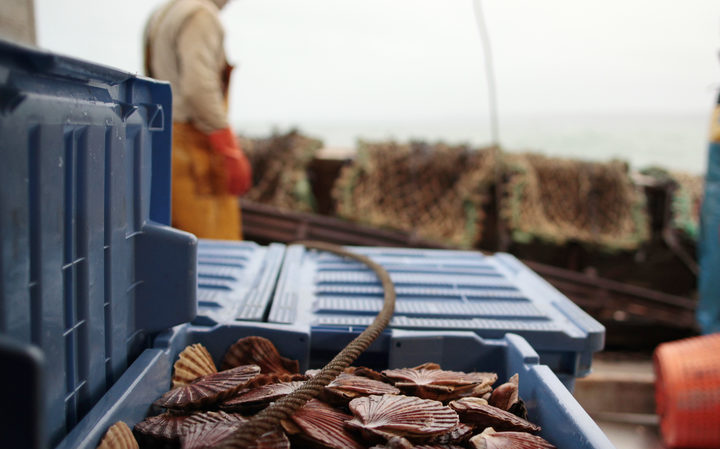 (File photo). There has been tension for years over scallop fishing off France's north-east coast. Photo: AFP

Nearly 40 French boats confronted British boats on Monday who they said are depleting scallop stocks in the area.

But the UK's environment secretary has said the British boats were fishing legally.

Boats collided and stones were thrown during the confrontation off the coast of Normandy in the early hours of Tuesday.

The crews alleged they had been surrounded and had rocks and metal shackles thrown at them, but French police said UK boats responded in kind.

France says it is ready to send more police vessels to the area to prevent further clashes.

Local official Ingrid Parrot said the situation had been "extremely tense" and both sides had thrown objects at each other.

She defended sending just one boat to police the incident overnight.

"The aim was to stop the tensions from increasing. We sent only one ship that day, but we will send more if it's necessary," Ms Parrot said.

Scottish White Fish Producers Association chief executive Mike Park said the incident was "high seas piracy" but that the French had agreed to a request for talks.

"We need to decrease tensions in the whole area," he told the BBC's Victoria Derbyshire programme.

They catch just 6 percent of the scallops in the area, he said.

"Scallops are plentiful and they're expensive," he said. "We're doing nothing wrong and what we can't do is be bullied."

The European Commission urged France and Britain to find an "amicable" solution.

Tension has rumbled for 15 years, but in the last 5 years a deal has prevailed - larger British boats stayed out of the area in exchange for more fishing rights.

British boats can gather scallops year-round, but French law restricts the scallop fishing season to between 1 October and 15 May.

Marc Delahaye from the Normandy fishing committee said the object to the British using "great dredgers" in the area, while the French used smaller boats.

A 2016 report by the International Council for the Exploration of the Sea (ICES) warned that the fishing effort by France, the UK, Belgium and Ireland in the Bay of Seine was "too high".

International environmental group ClientEarth said it was "disappointing" to see boats catching scallops during the spawning season, when it said depleted stocks could reproduce and grow.

France was demonstrating "high environmental standards" by banning its fleet from fishing during the summer, the group said.