A group of elderly South Koreans have arrived in North Korea to meet relatives they have not seen since the Korean War of 1950-1953. 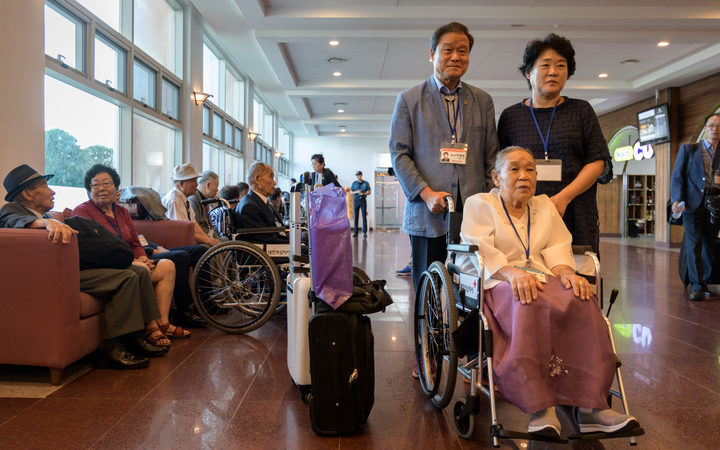 The war left the Korean peninsula divided and people who lived on the northern side were unable to leave.

The two Koreas, which are technically still at war, have organised reunion events before, but this is the first in three years.

The South Koreans were chosen by lottery - the oldest of them is 101.

Who is attending the meeting?

A hundred people were chosen by each side to attend the reunion.

Some dropped out after realising the relatives they had hoped to see were no longer alive, so in total there'll be 83 North Koreans and 89 from the South.

One woman, aged 92, told reporters she was going to be seeing her son for the first since the end of the war.

Lee Keum-seom said she lost track of her son, then aged four, and her husband in the panic of trying to flee.

"I never imagined this day would come," she said.

"I didn't even know if he was alive or not."

She was travelling to meet her younger sisters.

"I am very glad that I have been selected this time, I'm walking on air now."

Why are the meetings important?

The Korean War separated millions of people from their families.

These brief meetings are likely the last and only time many will see each other.

Over the years, at times of relative calm, the two Koreas have arranged for selected groups to visit each other. There have been 20 such events in the past 18 years.

But as those who remember the war grow old, time is running out.

Past reunions between brothers and sisters, parents and children and husbands and wives have been extremely emotional experiences.