Israel has released a Palestinian teenager jailed after she slapped an Israeli soldier at her home in the West Bank. 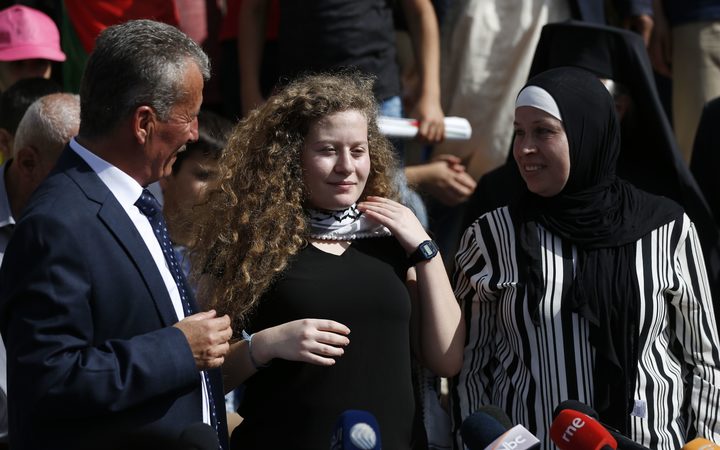 For Palestinians, she became a symbol of resistance to Israeli occupation, but many Israelis see her as a publicity-seeking troublemaker.

The 17-year-old was mobbed by well-wishers as she returned to her town.

"Resistance is continuing until the occupation is removed," she told the crowd.

Speaking to the media later, she said she had resolved "to study law and to focus on holding the occupation accountable".

Sixteen at the time, she was originally charged with 12 counts of assault, incitement, interference with soldiers and stone throwing.

In March, she agreed to plead guilty to four of the charges, including incitement and assault.

The day before Ahed Tamimi was released, two Italians were arrested for drawing a 4m (13ft) mural of the teenager's face on the wall that separates Bethlehem from Jerusalem.

Israeli border police said the two Italian men, and a Palestinian who was also arrested, were suspected of "damaging and vandalising the security fence in the Bethlehem area". 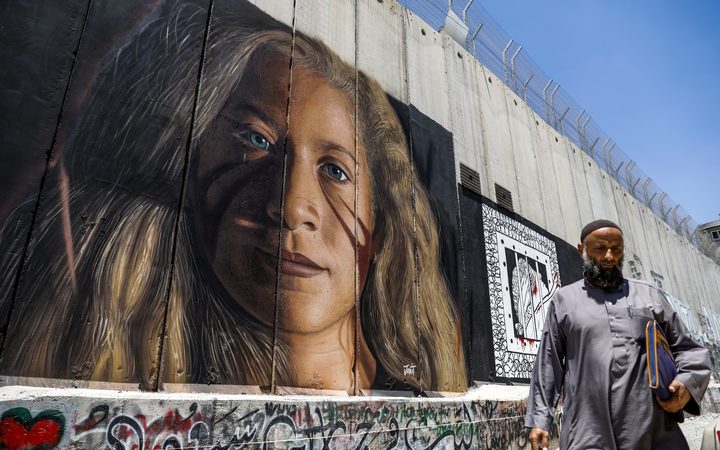 The group then allegedly tried to flee when confronted by police.

Last Wednesday, one of the men identified himself as Italian street artist Jorit Agoch. He posted an appeal for help on his Instagram page on Saturday, saying he had been arrested.

How did the incident go viral?

Ahed Tamimi was filmed by her mother, Nariman, shouting at and shoving two soldiers in the driveway of her family home on 15 December 2017.

The incident was streamed on Nariman Tamimi's Facebook page and video of the confrontation was widely viewed.

In the footage she kicks one soldier and slaps his face, and threatens to punch the other.

Ahed Tamimi told a pre-trial hearing that she had lashed out at the soldiers because she had seen them shoot her 15-year-old cousin Mohammed in the head with a rubber bullet that same day.

The Israeli military said it had dispatched the soldiers to the Tamimis' home, where Palestinian youths had been throwing stones at troops sent to quell violent protests.

It also later contested the cause of Mohammed's head injury, saying last month that the boy had told interrogators he sustained it from falling off a bike.

What was the fallout?

Many Israelis say Ahed Tamimi has long been exploited by her family, who they accuse of using her to try to provoke Israeli soldiers on film.

Her mother was also charged with incitement on social media and assault, while her cousin Nour, who participated in the incident, was charged with assault.

For Palestinians, Ahed Tamimi has become a national icon for what they see as acts of bravery in standing up to armed soldiers on occupied land.

Her face has appeared on street murals and posters, while an online petition organised by her father calling for her release gathered 1.7m signatures.