An airline passenger has described her terror and ultimate relief after the plane she was on was hit by lightning and forced to return to Melbourne Airport. 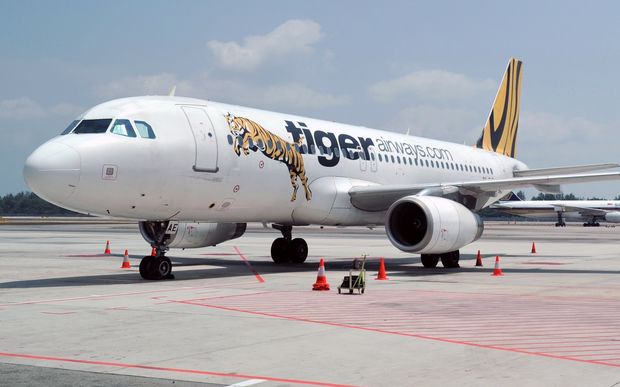 South Australian woman Karen Juniper said she was aboard Tigerair flight TT471 from Melbourne to Adelaide yesterday evening when it was struck by lightning.

"About 10 minutes in, there was a big flash out on the wing, the left-hand side, and a big boom.

"We were bouncing all over the place.

"Then the captain [announced] we've had a heavy strike and we're going to have to make a sudden turn back to the airport which I think we were all pretty happy about."

The plane continued to circle the skies for about 45 minutes before it could land, with its lights dimmed and some passengers in tears.

"People around us, the children, they were in tears and the woman next to me was head down, holding onto the seat in front.

"It's probably [something] that happens more often than we'd know about. But being amongst it, it's a scary event.

She said a flight attendant who walked out with passengers said the captain was "really worried".

Ms Juniper said while passengers were thankful to be back on the tarmac, many felt abandoned.

"There wasn't any further information coming from the cockpit.

"There was a little old lady, probably 80, and she was really bewildered.

"She didn't have a smart phone to find another flight and find a hotel room for the night.

A Tigerair Australia spokesperson confirmed the plane was struck by lightning during the flight.

"As a precautionary safety measure, the captain diverted back to Melbourne and the aircraft landed without incident," a statement read.

"The aircraft has been inspected and cleared for service by engineers and is back in operation today."