Sydney grandmother Maria Exposto has been found guilty of drug trafficking charges by the Court of Appeal of Malaysia and will face the death penalty. 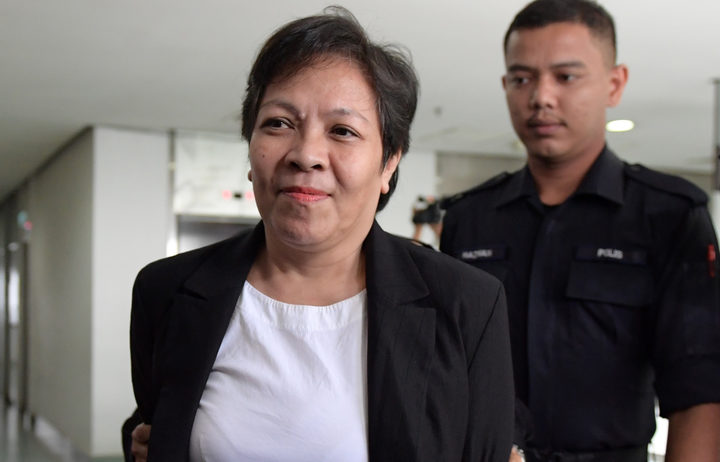 Maria Elvira Pinto Exposto (L), 54, was arrested in December 2014 at Kuala Lumpur airport with 1.1 kilograms of the drugs stitched into the compartment of a backpack she was carrying. Photo: AFP

Her lawyers will file an appeal in the Malaysian federal court.

The 54-year-old woman had been released on bail in January in Malaysia after avoiding the death penalty late last year.

She was caught with 1.1kg of crystal methamphetamine at Kuala Lumpur International Airport en route from Shanghai to Melbourne in 2014.

After three years in prison, she was found not guilty of drug trafficking in December 2017, with Judge Dato Ghazali finding Exposto was duped into carrying the drugs in a romance scam.

But Exposto remained in detention as the prosecutor planned to file an appeal.

Customs officers found the drugs stitched into the lining of a bag that had been given to her by an online boyfriend, a man claiming to be "Captain Daniel Smith" from the US Special Forces.

The judge found Exposto had genuinely fallen in love with the man, who groomed her over two years before she was flown to Shanghai and handed a bag containing drugs and asked to take it to Australia.

The mother-of-four was en route to Melbourne from Shanghai when the drugs were discovered.

She did not know the drugs were there and even volunteered that her bag be scanned through an airport X-ray machine.

"The court believes the testimony of Maria in that she was an innocent carrier," Exposto's lawyer Tan Sri Shafee Abdullah said.

"She was tricked into carrying the bag because of what we now call the internet scam, internet romance."