A gunman has shot and killed four staff at a university in Eskisehir in north-western Turkey. 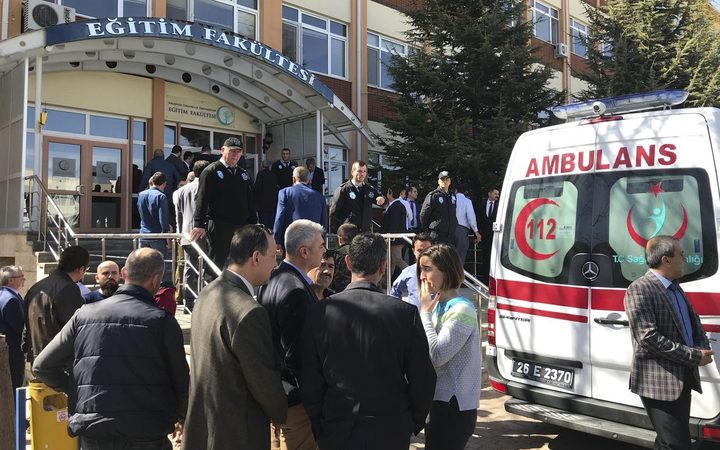 a research assistant shot dead four staffers of Osmangazi University and injured three others in Eskisehir province of Turkey on April 05, 2018. Photo: AFP

Turkish media report the attacker is a research fellow at the city's Osmangazi University and has been detained.

Those killed were a deputy dean, a faculty secretary and two lecturers, the state-run Anadolu news agency said. Three others were wounded in the attack, according to CNN Turk.

The gunman's motive is not clear but police are currently questioning him.

Reports suggest the assailant - named by state media as Volkan B - surrendered after initially trying to escape.

In a statement, the university's rector said those killed were the deputy dean of the education faculty, Mikail Yalcin; the faculty's secretary, Fatih Ozmutlu; lecturer Serdar Caglak; and assistant lecturer Yasir Armagan.

University rector Hasan Gonen described the researcher as a "problematic" person who was being investigated for verbally insulting academic staff as a result of suspected "psychological problems", Mr Gonen told CNN Turk.

Other reports said the attacker had upset colleagues by alleging they were members of the group blamed for the failed 2016 coup in Turkey.

Television footage showed emergency workers at the scene, attending to students and teachers who were in a state of shock.

Turkey has suffered a string of deadly attacks blamed on Kurdish militants in recent years. However the city of Eskisehir, home to nearly one million people, has not seen any attacks.

A connection between Thursday's shooting and extremist activity has not been established.