A New Zealand man has been sentenced to six-and-a-half years in jail over the fatal one-punch attack of grandfather Trevor Duroux, after a "scuffle" at a pub on Queensland's Gold Coast in 2015. 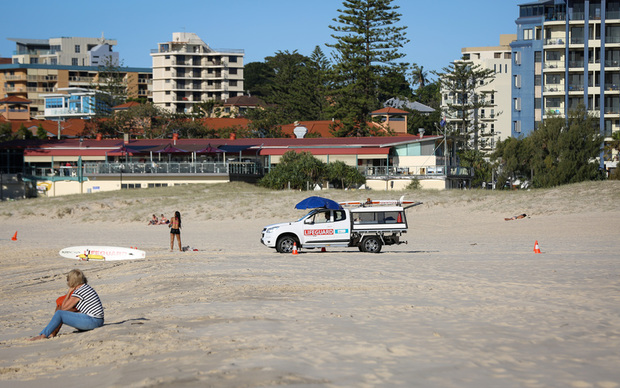 The assault happened in Coolangatta on the Gold Coast in 2015 Photo: RNZ / Alexander Robertson

Tristan Heather was charged with unlawful striking causing death after he hit Mr Duroux, 40, on the head outside a Coolangatta pub in December 2015 while the 18-year-old was celebrating his birthday.

He will need to serve 80 per cent of his sentence before he will be eligible for parole and will be deported back to New Zealand after serving his sentence.

"Yes, I know he [Heather] was a good boy, but the things that happened that night showed his characteristics that night, showed what he can do," she said.

"My nieces and nephews have to live without their father for the rest of their lives.

"Lay down the heavy sentence that is supposed to come with the legislation - why bring in legislation that is not going to be followed through?

"Is it just words on paper that make it look harsh?"

Mr Duroux fell to the ground in the incident and was knocked unconscious.

His life support was switched off by family after 10 days in intensive care at a Gold Coast hospital.

The court heard Heather was out celebrating his 18th birthday with relatives and had not known Mr Duroux before he was invited by a family member to drink with the group.

Prosecutor David Nardone said Heather drank at least 13 alcoholic drinks and the incident happened when he saw his friend in a "scuffle" with Mr Duroux outside the pub.

"It was there Mr Heather approached the deceased and punched him with a fist to the left side of his face," he said.

"[It caused him] to fall to the ground, hitting the right side of his head to the road - he [Heather] fled the scene."

Mr Duroux's relatives were in court for the sentencing hearing, wearing T-shirts with his face printed on them.

The prosecutor read victim impact statements on behalf of three of the victim's children, including his son Trevor French.

"I am numb - my heart stops at the thought of anyone having to go through this pain," he wrote.

"No child should have to bury their parent at the hands of another human being.

"We were torn apart and our family's lives changed forever."

"It's something which you will have to bear for the rest of your life and I'm certain you are well aware of that," he said.

"No person can win out of this process for sentencing for you for the crime you have committed."

Defence barrister Tim Ryan told the court his client went to help his workmate who was shoving Mr Duroux when Heather landed the fatal punch.

"He is genuinely remorseful - [it was] entirely the wrong response," he said.

"This was the most alcohol he had ever consumed in his life - [he is] acutely aware of the devastating consequences."

Heather wrote an apology letter, which was given to Mr Duroux's family, but not read out in court.

"I'm truly sorry and apologising for my behaviour and actions," Heather wrote to the family.

"I am sorry for the terrible grief that I have brought upon your family.

"I know that I can never take back the sadness and suffering pain that I have inflicted upon you all.

"I can never forgive myself for the events that happened that night."

Heather's family and supporters also helped to fill the courtroom, which was overflowing into the jury box, including his partner, who is expecting a child later this year.