At least 36 pro-Syrian government troops have been killed by a Turkish air strike in the region of Afrin, a monitoring group says. 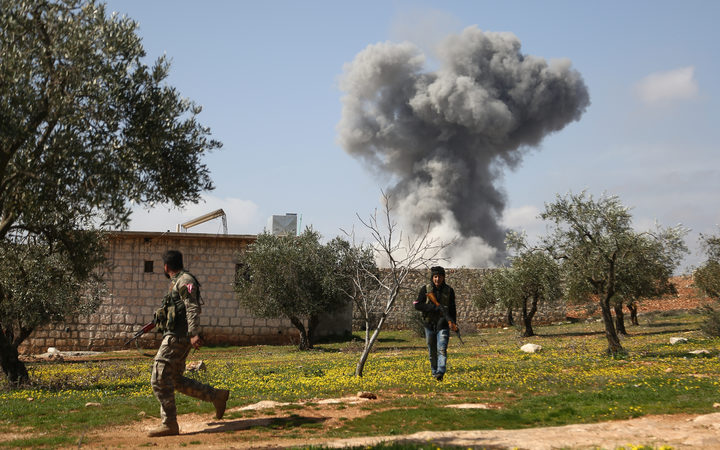 Turkish-backed Syrian opposition fighters are seen in the village of Jamanli, northeast of the Syrian city of Afrin, on March 3, 2018, as smoke billows in the background from a reported Kurdish People's Protection Units (YPG) location. Photo: AFP

The strike targeted a camp at Kafr Jina in the northern Syrian region, the Syrian Observatory for Human Rights (SOHR) said.

The pro-government troops entered Afrin two weeks ago to back Kurdish forces.

They are fighting a Turkish military offensive that was launched to clear Kurdish groups from Afrin.

The Syrian government has denounced the offensive as a "blatant attack" on its sovereignty and, according to state media, forces were sent in to support the Kurds.

The air strike followed one of the bloodiest days for Turkish troops since they began the offensive in January.

Eight Turkish soldiers were killed and another 13 were injured on Thursday in fighting in Afrin.

No official details of the clashes were given but the private Dogan news agency said Kurdish fighters used tunnels to ambush Turkish special forces in the Keltepe district.

A Turkish helicopter sent in to rescue the wounded was hit and had to turn back, the report added.

Thousands of civilians in Afrin have fled their homes since Turkey's offensive began.

The Turkish government says the Kurdish People's Protection Units (YPG) militia is an extension of the banned Kurdistan Workers' Party (PKK), which has fought for Kurdish autonomy in south-eastern Turkey for three decades.

The YPG denies any direct organisational links to the PKK.

Neither side has released much information about fatalities, making the death toll in Afrin difficult to gauge.

The UK-based SOHR says more than 141 civilians have died but Turkey denies this, saying only combatants are targeted.