Several people have been injured and a suspect was taken into custody after a car crashed outside the National Security Agency's headquarters in the US state of Maryland. 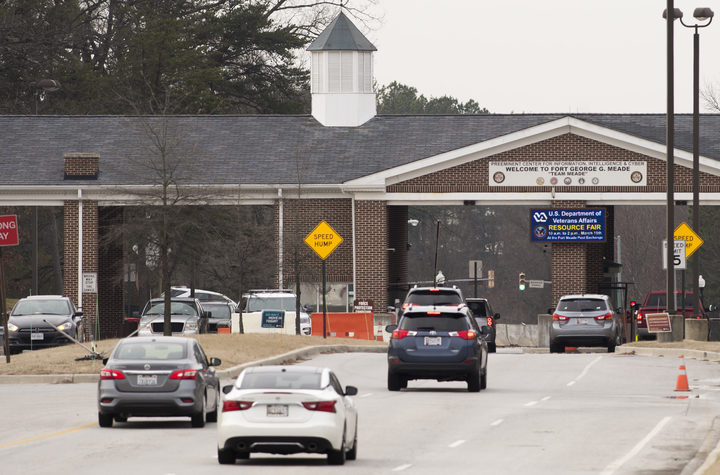 The main entrance of Fort Meade, headquarters of the National Security Agency (NSA), after a shooting incident at the visitor's entrance in Fort Meade, Maryland, on Valentine's Day. Photo: AFP PHOTO / SAUL LOEB

Gunfire rang out after a black SUV approached the facility in Fort Meade, Maryland, without authorisation.

An NSA spokesman said it was unclear if the shots had been fired by law enforcement officers or the suspect, but said the scene was now secure.

NSA officials said the injuries did not appear to be related to the gunfire.

They added that several people were taken to hospital from the US Army base, about 48km northeast of Washington DC, after the incident on Wednesday morning.

CBS News images showed the vehicle with what looked like bullet holes in the front windscreen and its air bags apparently deployed.

Its appeared to have collided into some NSA-stamped concrete barricade blocks outside the installation.

NBC News said its helicopter could see police surrounding a handcuffed man sitting on the ground.

The FBI's Baltimore office said on Twitter it had sent agents to investigate the incident, and the situation had been "contained".

Local emergency services also responded to the scene, and schools said they expected a delay as bus routes were affected by increased traffic.

The intelligence agency said on Twitter: "NSA police and local law enforcement are addressing an incident that took place this morning at one of NSA's secure vehicle entry gates.

"The situation is under control and there is no ongoing security of safety threat."

Another statement from the NSA public affairs office said "a security incident" happened at one of its checkpoints known as Canine gate about 7am local time.

Maryland Congressman Dutch Ruppersberger tweeted the reported injuries were not from gunshots.

US President Donald Trump has been briefed on the incident.

"Our thoughts and prayers are with everyone that has been affected," White House spokeswoman Lindsay Walters said.

In March 2015, one person was killed and another seriously wounded after driving a vehicle up to the NSA's gate, ignoring commands to stop.

News reports later suggested the two occupants of the vehicle may have been under the influence of drugs after attending a party.

Despite highway signage, it is not unusual for motorists to take a wrong turn and end up at one of the heavily guarded gates to the sprawling NSA complex, where armed federal officers direct them to turn around.