Maldives police have arrested the country's chief justice of the Supreme Court as a political crisis worsens in the Indian Ocean nation. 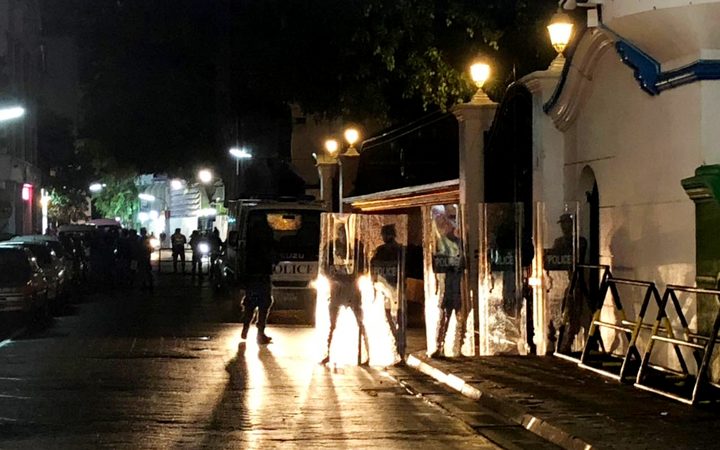 Chief Justice Abdulla Saeed and another judge, Ali Hameed, were arrested hours after the government declared a state of emergency.

No details were given about the investigation or any charges.

The opposition have called the government moves a "purge" and there has been international condemnation.

Maldives is a nation is made up of 26 coral atolls and 1192 individual islands, and tourism is a vital part of its economy.

Last week, the Supreme Court ordered the release of a group of opposition politicians. It also ruled that the 2015 trial of former President Mohamed Nasheed, who is living in exile, had been unconstitutional.

It was followed by a pledge from the country's police commissioner that he would enforce the court's ruling. In response, the government of President Adulla Yameen sacked him.

The army has now been ordered to resist any attempt to impeach or remove President Yameen.

The crisis escalated on Monday when a state of emergency was declared, giving a range of powers to the security forces to make arrests, and banning public gatherings.

Former President Maumoon Abdul Gayoom, who has allied himself with the opposition, was detained at his home.

In a video posted online the ex-president addresses his supporters (in Dhivehi), saying that he has not "done anything to warrant arrest" and urging them to "remain strong".

Police were also dispatched to the Supreme Court.

Mr Nasheed - the country's first democratically elected leader whose trial was at the centre of the Supreme Court's ruling - told BBC News that the government's actions were "brazenly illegal" and amounted to a coup.

"Maldivians have had enough of this criminal and illegal regime," he said. "President Yameen should resign immediately."

Since President Yameen took power in 2013 the country has faced questions over freedom of speech, the detention of opponents and the independence of the judiciary.

The US State Department said it was "troubled and disappointed" by the developments.

It accused police of failing to obey a lawful court ruling, and said President Yameen had "jailed or exiled every major opposition political figure".

America stands with the people of Maldives. The Maldivian government and military must respect the rule of law, freedom of expression, and democratic institutions. The world is watching.

The US National Security Council, meanwhile, warned in a tweet that "the world is watching".

Boris Johnson, foreign secretary of the UK, the former colonial power, called on President Yameen to lift the state of emergency.

"The damage being done to democratic institutions in Maldives and the sustained misuse of process in Parliament is deeply worrying," he said in a statement.