At least 36 people have been killed after a coach plummeted 100m (330ft) down a cliff and landed upside down on a beach in Peru, officials say. 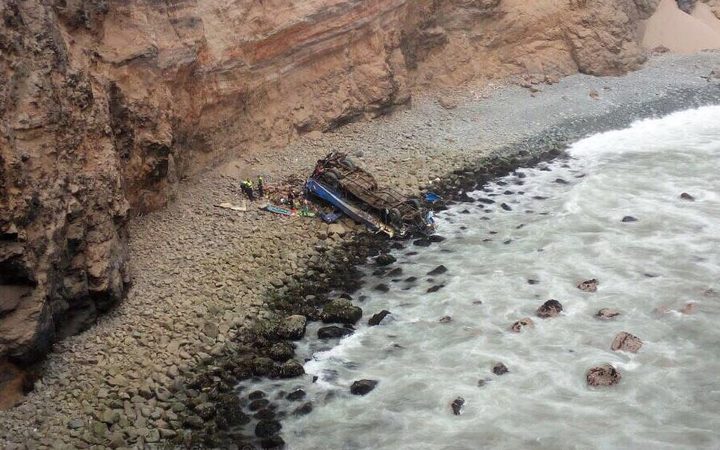 The accident happened on a notorious stretch of road known as Curva del Diablo (the devil's bend) in Pasamayo, north of the capital Lima. Photo: @naval_peru/Twitter

The health ministry said six survivors had so far been pulled from the wreckage and taken to hospital.

The accident happened on a notorious stretch of road known as Curva del Diablo (the devil's bend) in Pasamayo, north of the capital Lima.

A transport official said the coach was carrying about 50 people.

The winding Pacific Ocean road is considered one of the most dangerous in Peru.

Peru's President Pedro Pablo Kuczynski said it was "painful for the whole country to suffer an accident of this magnitude".

He sent a message of "deep solidarity" to the families of the victims.

Images from the scene showed rescuers surrounding the wrecked coach while people on the road above looked on.

Peru transport chief Dino Escudero said an investigation had been launched but it appeared that the coach had been in collision with another vehicle, causing the driver to lose control.

A helicopter was helping in the rescue operation.

The coach had been travelling to Lima from Huacho, about 130km (80 miles) north of the capital.

Correspondents say road accidents are common in Peru. In 2016, 493 people were killed in more than 3,800 accidents, according to official figures.