The body of a young Australian boy has been found in a New South Wales river, while the child's mother has been remanded in custody on a charge of attempted murder. 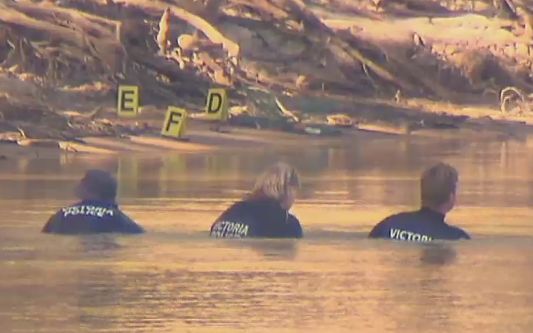 The woman, who is aged in her 20s, did not appear in court at Deniliquin this morning.

She was denied bail and will return to court on 6 March.

The woman was extradited from Victoria to New South Wales on Friday night and charged with the attempted murder of one of her sons.

The mother allegedly told onlookers "I had to drown my babies" after holding her two children under the water in the Murray River on the Victoria-New South Wales border, a court has heard.

One of the two boys, who are both aged under 10, is in hospital after being injured by a dog reacting to the scene at Moama.

The Deniliquin woman, aged in her 20s, faced an extradition order by video-link in a Bendigo court yesterday afternoon, where it was agreed she would be sent to Deniliquin, in NSW, to face a charge of attempted murder of her older son.

Police said the mother took the boys to a property outside Moama, south of Deniliquin, on Thursday at 4pm where they went fishing in the river.

She allegedly asked the elder boy to get into the river and dunk his head in the water, the court heard.

It is alleged she then held him under the water in an attempt to drown him.

The court was told the boy was able to wriggle free when his younger brother started screaming on the riverbank and the mother turned around.

The older boy was then "savagely mauled" by a dog.

The ABC understands the dog that bit the boy was reacting to what was happening in the water and was not a family pet.

Police told the court that the woman then held the younger boy under the water.

He was last seen floating in the river and a search of the area continues.

Onlookers came to the older boy's aid, and they heard the woman say: "I had to drown my babies."

Police said the woman later made full admissions, and told them "I killed my babies".

Grandmother upset agencies 'fobbed her off'

Lawyer Dale Brooks, who is representing the grandmother of the boys, said the grandmother had approached government agencies several times with concerns about the woman but "they fobbed her off".

"A number of organisations ought to be held to account," Mr Brooks said.

The NSW Police tweeted earlier that the woman had been extradited from Victoria and was being transported to Deniliquin.

NSW police said she is not expected to be released on bail.