At least six people are dead and a university student is missing as record-breaking rains batter parts of south-western Japan, setting off flooding and landslides. 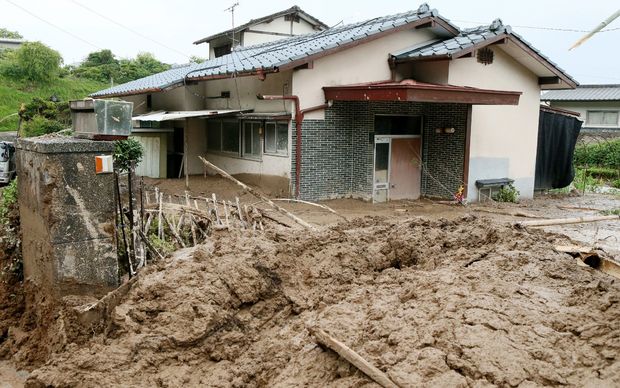 Several houses in Kumamoto in southern Japan have been inundated by mudslides after heavy rain. Photo: AFP

Some places have been hit by more than 100mm of rain in an hour.

Hundreds of thousands of people have been told to evacuate a wide swathe of Kyushu, where 49 people died in earthquakes in April that weakened the ground and left it prone to landslides.

The area has been shaken by a steady series of smaller earthquakes, including one this morning.

"I was in such a hurry to leave I don't have anything more than what I'm wearing," one elderly woman told Japan's public broadcaster.

Among those killed were a couple in their 80s, whose house in Kumamoto was engulfed by mud.

Prime Minister Shinzo Abe was in Kumamoto on Wednesday to begin campaigning for an election next month for parliament's upper house.

Authorities warned of further landslides in areas where the ground was weakened, and several thousand people were still living in evacuation centres.