Two people are dead after a murder-suicide at the University of California in Los Angeles, shutting down the campus for two hours as officers in camouflage and tactical gear responded to reports of a shooting. 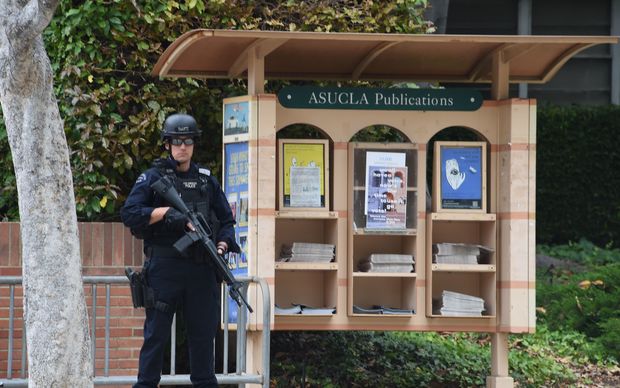 Police on the scene at the campus. Photo: AFP

Los Angeles Police Chief Charlie Beck confirmed one man shot another and then himself in the engineering building, and that police recovered a gun at the scene.

"There are no suspects outstanding and no continuing threat to UCLA's campus," Beck told reporters, without offering further details about the victims.

Police recovered what may turn out to be a suicide note, Beck said.

The shooting created a stir as some 200 police approached the scene fearing the shooter might still be active, and university officials ordered the campus locked down.

President Barack Obama was briefed aboard Air Force One and he asked his team to keep him updated, White House spokesman Josh Earnest said.

At least three city blocks leading into the campus were filled with dozens of emergency vehicles. Officers with rifles, bulletproof vests and helmets surrounded the area.

An armoured car was parked in the middle of one intersection, and helicopters clattered overhead.

UCLA, with more than 43,000 students, is in the Westwood section of Los Angeles and one of the more well-regarded schools in the University of California system, known for its successful sports program.

"I couldn't believe it happened at UCLA," said Sam Zheng, 38, a researcher who was working in the engineering building at the time of the shooting. "I just want to go home. I don't want to stay here." 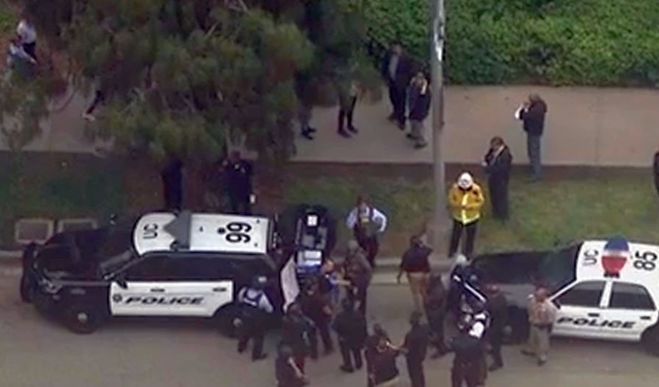 A screengrab from a local television station's live feed shows police at the cordon around the shooting area. Photo: KTLA TV

Engineering student Aaron Feigelman said he received a text message alerting him to an emergency and entered an adjacent building, where he and five others took refuge for 90 minutes.

"We just bolted out of there and ran up to the seventh floor," Feigelman said. "We tied the bathroom door hinges with belts to keep the door closed because there were no locks. And we just waited. It was really scary."

Los Angeles Mayor Eric Garcetti praised the people of UCLA for "extraordinary grace and calm" and lamented the violence at a place of learning.

"I am heartbroken by the sight of SWAT teams running down avenues normally filled with students, and angered by the fear that one person with a firearm can inflict on a community," Garcetti said. 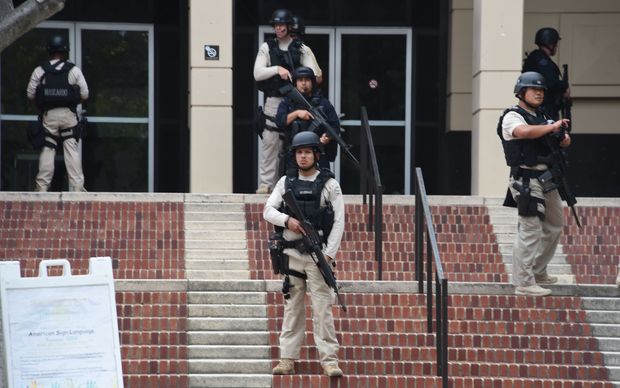 Security staff at the University of California's Los Angeles campus after the fatal shootings. Photo: AFP