United States President Barack Obama has announced the US is lifting the embargo on sales of lethal weapons to its former enemy Vietnam. 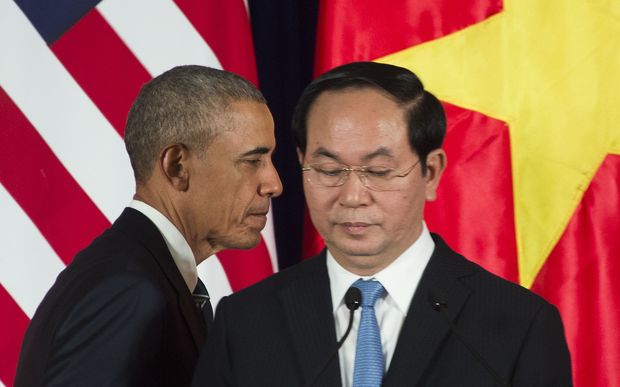 Speaking during a visit to communist Vietnam and talks with its leaders, Mr Obama said the move removed a "lingering vestige of the Cold War".

The US is trying to bolster its relationship with its Pacific allies, as China asserts territorial claims, but Mr Obama said the lifting of the embargo was not related to US policy on China.

"It's based on our desire to complete what has been a lengthy process of moving towards normalisation with Vietnam," he said in Hanoi.

Vietnam had been arguing for an end to the embargo, which was partially lifted in 2014.

"Sales will need to still meet strict requirements, including those related to human rights, but this change will ensure that Vietnam has access to the equipment it needs to defend itself," Mr Obama said after talks with President Tran Dai Quang.

Vietnam is one of several countries in the region involved in maritime disputes with China.

In 2014, a row over a Chinese oil rig near the Paracel islands led to clashes between Chinese and Vietnamese vessels and anti-China riots in Vietnam.

The US insists vessels should be free to navigate in the South China Sea.

Mr Obama's visit comes 41 years after the end of the Vietnam War in which the United States and its allies tried to prevent a communist takeover of South Vietnam.

Several million Vietnamese - civilians, communist fighters and South Vietnamese soldiers - were killed, as well as more than 58,000 US soldiers.

New Zealand sent 548 soldiers to Vietnam, of whom 37 died while on active service. Two civilians serving with the surgical and Red Cross teams also lost their lives.

By the end of the war in 1975, the communists had gained control of the entire country.

While in Vietnam, Mr Obama is expected to meet dissidents and make the case for Vietnam to remove obstacles to the Trans Pacific Partnership (TPP) free trade deal.

The US president will then fly to Japan for a summit of the G7 industrialised nations.

His visit will include a tour of Hiroshima, where the world's first deliberate nuclear attack was carried out in 1945 by the US, killing at least 140,000 people.