Thirteen people are presumed dead after a helicopter crashed west of the Norwegian city of Bergen, rescuers say. 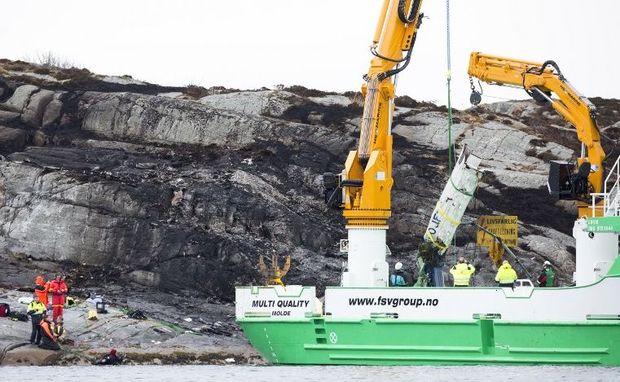 A rescue vessel lifts up parts of the helicopter that crashed off Bergen with 13 people on board Photo: AFP

Eleven of those on board were Norwegian, one was British and one Italian. No survivors have been found.

A major rescue operation was launched but ended within hours of the crash.

Meanwhile, Norway's civil aviation authority has imposed a flight ban on the type of helicopter that crashed - the Eurocopter (EC) 225L Super Puma. Reports say it was "totally destroyed".

Its officials told VG newspaper (in Norwegian) that servicing for the helicopter which crashed had been delayed twice in 2015, for a total of 200 flying hours.

The British Civilian Aviation Authority later said it was suspending commercial use of the Super Puma, so it would be unable to carry oil and gas workers but could still fly for other purposes.

The aircraft was flying from the Gullfaks oil field to Bergen, a centre for the North Sea oil and gas industry.

Eleven bodies have been found, and two other people are still missing.

Oil company Statoil said all the passengers were on assignment for the company, but worked for different organisations.

Statoil has suspended oil production at the Gullfaks B platform "so that we can take care of the staff in the best way possible", company vice-president Arne Sigve Nylund told journalists.

The helicopter came down near the small island of Turoey, just west of the village of Solsvik.

"There was an explosion and a very peculiar engine sound, so I looked out the window. I saw the helicopter falling quickly into the sea. Then I saw a big explosion," a resident told local newspaper Bergensavisen.

Photos from the scene showed thick smoke coming from an area of rocky islets.

Local media said the helicopter dropped 640m in the last 10 seconds before it crashed. Some wreckage was found on the rocks, and parts of the fuselage are in the sea.

The tail of the aircraft was raised in a salvage operation, local media said, and preparations are being made to recover the fuselage.

The UK's Air Accidents Investigation Branch is sending a team to Norway because it has investigated a number of crashes involving helicopters operating to and from offshore oil and gas fields in recent years.

In 2012, EC225 Super Puma helicopters crashed in two incidents in Scotland, one off Aberdeen and another off Shetland. Both crashes were blamed on gearbox problems.

In both cases, all passengers and crew were rescued, though in 2013 a Eurocopter AS332 also crashed in Shetland with the loss of four lives.

EC225s in the UK were grounded following the crashes but given the go-ahead to resume flying in 2013.

Helicopter International magazine editor Elfan ap Rees said major modifications seemed to have dealt with the gearbox problem, and it was difficult to know what could have gone wrong in the Norwegian crash.

"Overall, the Super Pumas have a good safety record and they have been constantly improved and upgraded," he told the BBC.

"They have had quite a lot of use in the offshore industry."