Pope Francis has taken 12 Syrian refugees back with him to the Vatican after visiting a camp on the Greek island of Lesbos. 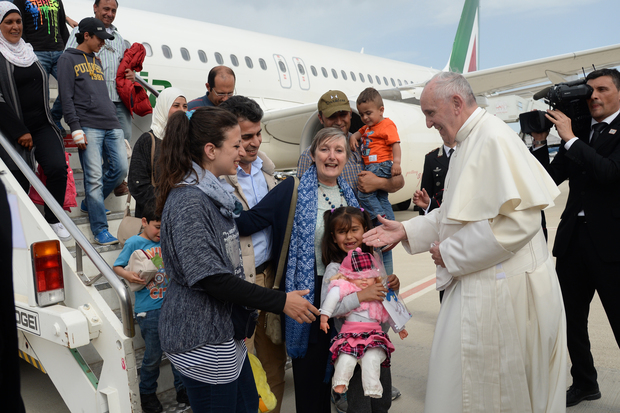 Pope Francis welcomes a group of Syrian refugees after landing in Rome following a visit at the Moria refugee camp. Photo: AFP

The three families, including six children, are all Muslim and had their homes bombed during the Syrian war.

The Vatican said in a statement that Pope Francis wanted to "make a gesture of welcome'' to the refugees.

Thousands of migrants and refugees are now stuck on Lesbos after last month's EU-Turkey deal to try to ease the flow.

All of those leaving with the Pope were already living on Lesbos before the deal was implemented, the Vatican said.

They were reportedly selected from lots drawn, and will be looked after initially by the Sant'Egidio community, known for their charity work.

Under the EU-Turkey agreement, migrants and refugees arriving illegally on the Greek islands from Turkey after 20 March will be deported unless they successfully claim for asylum.

In return, for every Syrian returned to Turkey, the EU will take another Syrian directly from Turkey.

Pope Francis earlier told migrants and refugees living in the Moria camp - some of whom are facing being sent back - "you are not alone". 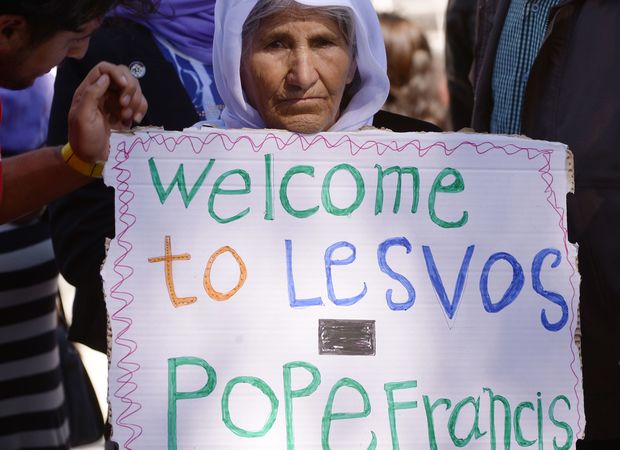 A woman holds a placard welcoming the Pope to the Moria refugee camp. Photo: AFP

About 3000 people are being held in the camp on Lesbos, some of whom lined the streets with banners pleading for help as the Pope arrived.

Some wept, others threw themselves at his feet or chanted "freedom".

In his speech, the Pope acknowledged "the great sacrifice" the people in the camp had made, saying he wanted to "draw the attention of the world to this grave humanitarian crisis".

He told the camp's residents: "Do not lose hope. The greatest gift we can offer to one another is love."

The Vatican has stressed the Pope's visit was purely humanitarian and religious in nature and should not be seen as a criticism of the deportations.

In September, the Pope made space in the Vatican apartments for two refugee families, urging Catholics across Europe to play their part to resolve the crisis.

He also visited the Italian island of Lampedusa in 2013 to show similar support for migrants and refugees after dozens died trying to reach it.

Migrant arrivals in Greece have fallen significantly this year, following the closure of borders and the announcement of the EU-Turkey deal.

In the week to 13 April, arrivals in Greece were 76 percent lower than the previous week, the International Organization for Migration (IOM) said.

But over the same period arrivals into Italy surged, according to the IOM - 173 percent higher than the previous week.