Greece has condemned the action of Macedonian police to disperse hundreds of refugees and migrants at the border between the two countries. 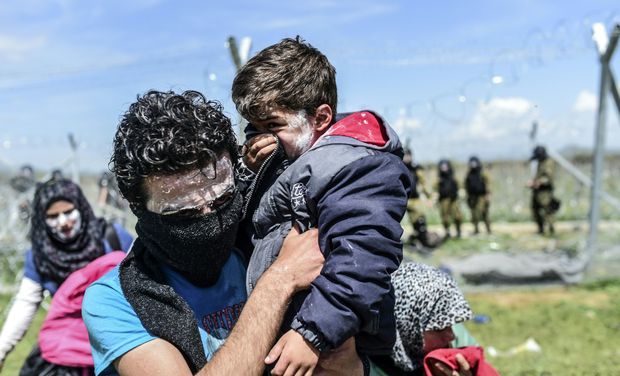 A family with toothpaste smeared over their faces as a protection against teargas, moves to safety as refugees and migrants clash with Macedonian police. Photo: AFP

Tear gas was used near the Idomeni crossing, where more than 11,000 refugees and other migrants were camped out on the Greek side of the border.

Balkan states closed off the migrant route to northern Europe this year.

"The indiscriminate use of chemicals, rubber bullets and stun grenades against vulnerable populations... is a dangerous and deplorable act," Greek government spokesman George Kyritsis said.

MSF said authorities had fired tear gas, rubber bullets and stun grenades at those trying to force their way into Macedonia.

"Two hundred people were treated for respiratory problems caused by tear gas, mostly men but including women and some children under the age of five," MSF spokesman Jonas Hagensen told the BBC.

More than 30 people were treated for rubber bullet wounds, he added, and a further 10 people said they had been beaten by Macedonian police.

Some 30 people had been treated for shock and other injuries; seven had been sent to hospital with more serious wounds.

The unrest reportedly began after a group of refugees and migrants approached the fence to ask Macedonian border guards to open it and let them pass.

When their demand was rejected, they were joined by others, some of whom were carrying packed bags.

People could be seen running from clouds of tear gas just inside the Greek border, as well as hurling stones across the fence.

An unnamed Macedonian police official told AFP: "Greek police are using tear gas near the border with Macedonia. It is calm so far on the Macedonian side of the border."

"The police fired tear gas in response," the official said.

"The migrants were pushing against the fence but standing on the Greek side of the border. The fence is still there, they have not broken through."

This week Greece began deporting people who do not qualify for asylum, under an EU deal with Turkey.

More than 300 people, many of them Pakistanis, were sent to Turkey by ferry from the Greek islands.

In addition, nearly 100 were deported via Greece's land border with Turkey, AFP reports.

The International Organisation for Migration said the rate of arrivals had dropped in the first week of April, with 5 April the first day since last year that no arrivals were recorded.

More than one million undocumented refugees and other migrants have entered the EU by boat from Turkey to Greece since early last year, generating an unprecedented crisis for the EU's 28 member-states.