South Australian police have located a body believed to be that of missing nurse Gayle Woodford during a search today. 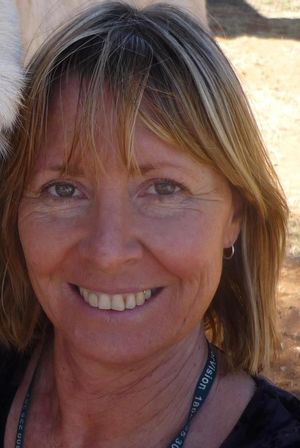 Mrs Woodford, 56, had not been seen since she and her husband went to bed on Wednesday night at their home in the remote APY Lands community, 1200 kilometres north-west of Adelaide.

Detective Superintendent Des Bray said the police found a shallow grave this afternoon and were expecting to find Mrs Woodford's remains inside.

"We found two areas of interest - one area where there are some items related to this crime and then further out, another 500 metres out, is where we found the gravesite," he said.

Forensic investigators would head to the area tomorrow to examine the scene, which was being kept under police guard.

A four-wheel-drive ambulance Mrs Woodford used for work was intercepted by police 400 kilometres away in Coober Pedy the morning after she disappeared.

Police said the ambulance's GPS showed the vehicle had left Fregon after midnight and was driven to Mimili, then Indulkana and Marla, in the early hours of Thursday.

Police found three people inside, and a 36-year-old man from Fregon who was later charged with the vehicle's theft and driving without a licence.

Detective Superintendent Bray said police had a suspect in custody.

"We only have one suspect and that suspect is in custody on vehicle related crimes and we expect to interview that person later this afternoon," he said.

"Gayle, I'm told, was a much loved person here so this is devastating news, not just for Fregon but for the whole APY community," he said.