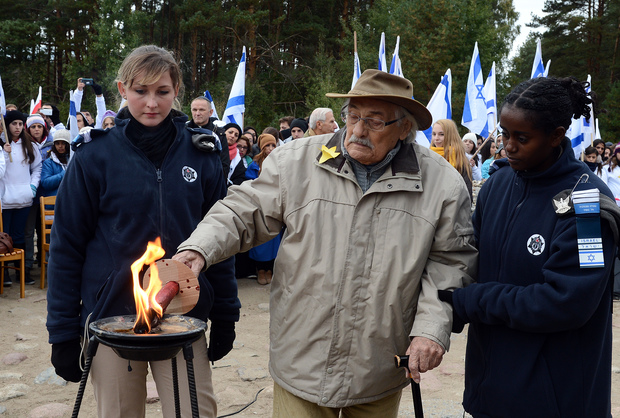 Samuel Willenburg (centre) lighting a candle in front of the monument of Treblinka on 2 October 2013. Photo: AFP

Only one of 67 people known to have survived the camp, he escaped by clambering over bodies piled up by a fence as the Nazis shot prisoners during a mass break-out.

About 870,000 people died in the gas chambers at Treblinka - more than anywhere else except Auschwitz.

They were told they were at a transit camp and had to undress and shower before being sent onward. In reality, the shower rooms were gas chambers.

But because he was a bricklayer he was assigned to manual labour duties and escaped an early death. His job was to sort through the belongings of the people sent to the gas chambers.

After the war Mr Willenberg - whose two sisters were killed at the camp - moved to Israel and became a surveyor.

"I live two lives, one is here and now and the other is what happened there,'' he said.

"It never leaves me. It stays in my head. It goes with me always."

Most of Treblinka's guards were never prosecuted for their part in the crimes there.

Treblinka's commandant, Franz Stangl, was sentenced to life imprisonment in October 1970 following his trial in the west German city of Duesseldorf.

Today nothing remains of the extermination camp apart from the ashes of the mostly Jewish men, women and children murdered there.