Severe weather fronts are lashing several regions of Australia, with a man dying after being swept away by floodwaters in Queensland and a "mini-tornado" destroying several homes in New South Wales. 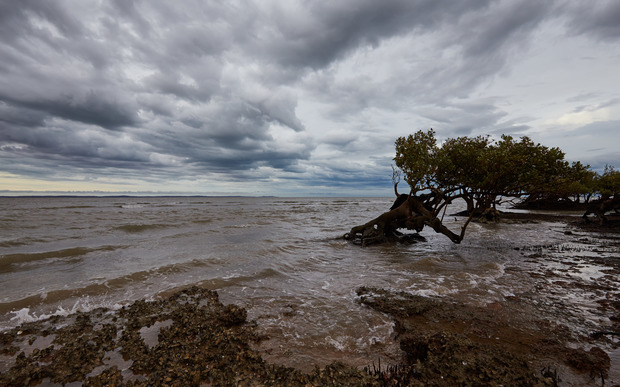 "It's quite unusual to see this sort of pattern develop right across that broad section of states," BoM meteorologist Craig Burke said.

"It is unlikely we would see the same extent again like what we have seen in the past few days.

"This was a unique weather set up."

Tropical #CycloneStan at 10am WST. Stan is 1st cyclone we have been able to see in true colour from space. pic.twitter.com/MeWgHdiZBn

In Western Australia, Tropical Cyclone Stan brought strong winds and heavy rain to the Pilbara, while a weak monsoon has arrived in the Top End.

Meanwhile, a man was killed near Bundaberg in southern Queensland after his car was washed away by floodwaters, just moments after he let his brother out to check on water levels.

Swiftwater rescue crews in the region rescued several other people, including a woman and her children, and a man who had abandoned his car and was found clinging to a tree.

In south-east NSW, destructive winds during thunderstorms destroyed several homes at Forbes Creek, about an hour east of Canberra.

The Hoskingtown-Rossi Rural Fire Brigade (RFS) said a "mini-tornado" hit the town, however a BoM forecaster was unable to confirm any tornado activity in the area.

Bungendore SES incident controller Peter Adrian said a strip of land in the area about 200 metres wide by about three kilometres was badly affected by the storm.

"It looks like a cyclonic-type wind went through there somewhere before midnight ... there's at least four houses with roof damage, or roofs actually lifted off them and internal walls collapsed," he said.

Mr Adrian said in one instance the roof of a home had been "relocated from the house into the middle of the road".

Storms also wreaked havoc on Sydney and other parts of New South Wales on Saturday, with major roads flooded and power out in several regions.

Stan, which is now at a category one level, is not expected to directly hit populated areas, but residents are on alert for strong winds, heavy rains and dangerous storm tides, especially near the cyclone's centre.

In the Northern Territory, a weak monsoon has causing numerous road closures in Darwin and dumped up to 100 millimetres of rain in some areas.

Meanwhile Tasmanians still cleaning up after damaging heavy rain two days ago have been spared from predicted further rain.

South Australia and Victoria were also hit by storms on Saturday , that cut power to homes and businesses and caused flash flooding in some areas.