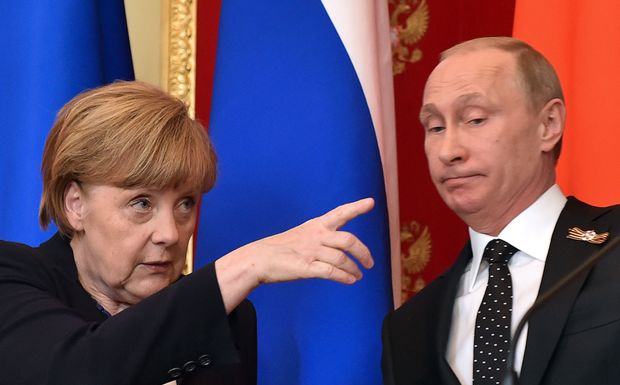 Russian president Vladimir Putin has topped Forbes' annual list of the most powerful people in the world for the third year in a row, but Mr Obama has been relegated to third place by Angela Merkel.

The German chancellor is one of only nine women who made the cut.

The magazine explained that Mr Obama's influence is shrinking as he enters the final year of his presidency, while Mr Putin is one of the few people in the world powerful enough to do what they want.

Thirty people on the list of 73 are from the United States, eight are from China, and four each from Japan and Russia.

How do they make the cut?

The first, was whether they had power over a lot of people (Pope Francis, number four on the list, is the spiritual leader of more than a billion Catholics.)

Next they considered the amount of financial resources they controlled (for heads of state that meant GDP), and finally whether the candidate was powerful in multiple spheres.

In October, Moscow bombed Islamic State forces in Syria and then met face-to-face with the Syrian President Bashar al-Assad, making the US and NATO look weak, and helping rebuild Russian influence overseas.

Mrs Merkel, who jumped up from fifth place last year, is the backbone of the 28-member European Union, and her decisive actions dealing with the Syrian refugee problem and the Greek credit crisis helped bump her up the list.

He struggled to get things done at home, where his approval ratings were under 50 percent. And internationally, he was outshined by Mrs Merkel in Europe, and outmanoeuvered by Mr Putin in the Middle East.