Japan's Mitsubishi corporation has made a landmark apology for using US prisoners of war as forced labour during World War Two. 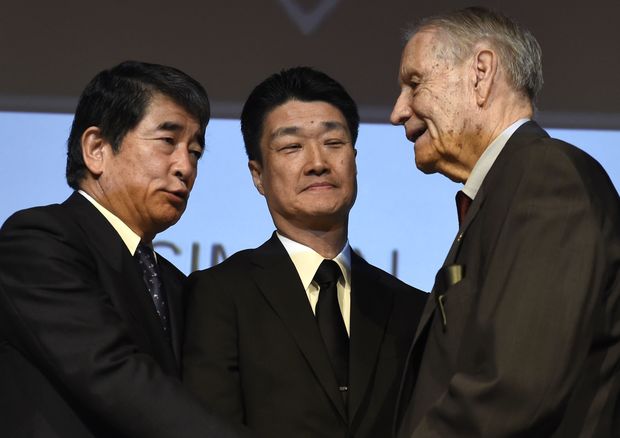 A senior executive, Hikaru Kimura, expressed remorse at a ceremony in Los Angeles that prisoners had been put to work in mines operated by the firm.

It is believed to be the first such apology by a Japanese company.

One of the few surviving former US prisoners forced to work in Japan accepted the apology.

It would improve the relationship between Japan and the United States, he added.

Relatives of other former prisoners were also present at the ceremony at the Simon Wiesenthal Centre.

Mitsubishi is acting independently of the Japanese government which has already issued a formal apology to American prisoners.

Japanese government officials say that it is an important gesture ahead of the 70th anniversary of the end of the war in August.

Only two living survivors could be located to accept the apology, and, only Mr Murphy was fit enough to make the trip to Los Angeles, local media reported.

About 500 American POWs were forced to work in the mines from among the thousands of allied, Philippine, Korean and Chinese prisoners who were pushed into slave labour by the Japanese.

'Slavery in every way'

Mr Murphy told US media that he spent a year at a copper mine near Hanawa, an experience he described as "a complete horror".

"It was slavery in every way: no food, no medicine, no clothing, no sanitation," he said, adding that it was all the more galling to know that Mitsubishi built fighter aircraft used against American forces.

He said that, while he had forgiven his captors, he still wanted for an apology for his ordeal.

Although no cash compensation is being offered by Mitsubishi, the upcoming apology is "a big deal", he said.

Correspondents say it is not clear why the apology has come so long after the war.

"We hope this will spur other companies to join in and do the same." said Rabbi Abraham Cooper, associate dean at the Simon Wiesenthal Centre.