A bomb has killed at least two people, including a police officer, and injured at least 10 more people at a rally in Ukraine's second city Kharkiv. 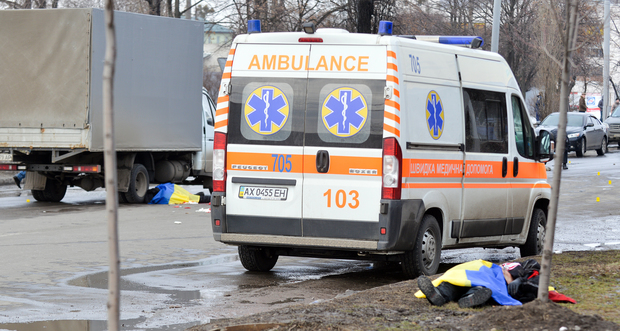 The rally was one of several being held to mark a year since the Kiev uprising that led to the fall of pro-Russia leader Viktor Yanukovych.

Kharkiv lies outside the conflict zone in eastern Ukraine, where a ceasefire appears finally to be taking hold.

The government has agreed to start pulling back heavy weapons from Sunday, and the rebels said they would start the process on Tuesday.

The pullback will not be completed until at least 8 March, five days later than the deadline set at peace talks in Minsk this month.

Another key element of the Minsk deal moved forward on Saturday when the Ukrainian government and the rebels exchanged 191 prisoners.

The explosion in Kharkiv happened at 13:20 local time as people gathered near the city's Palace of Sport for a march in support of national unity, Ukrainian media say.

Officials initially said an explosive device had been thrown from a car but later said it had been buried in the snow.

Eyewitness Alexei Grechnev told the BBC: "We were walking in a column of people, in the front section, when I heard a loud boom and saw some people fall to the ground a few metres away from me, a somewhat unexpected and unreal scene, like in movies."

"Security service detained persons who may have been involved in the preparation and carrying out of crimes of a terrorist nature in Kharkiv, including the explosion," security spokesman Markian Lubkivskyi wrote on his Facebook page.

He later said the four suspects were Ukrainian citizens who had received instruction and weapons in the Russian city of Belgorod, just across the border.

He also posted a picture of a rocket launcher which he said the suspects were planning to use in attacks in the city.

Ukrainian President Petro Poroshenko described the attack as "a bold attempt to expand the territory of terrorism" and promised to bring the perpetrators to justice.