Amateur footage captured the incident in a Metro station shortly before Chelsea's 1-1 Champions League draw with Paris Saint-Germain in the French capital on Tuesday evening. 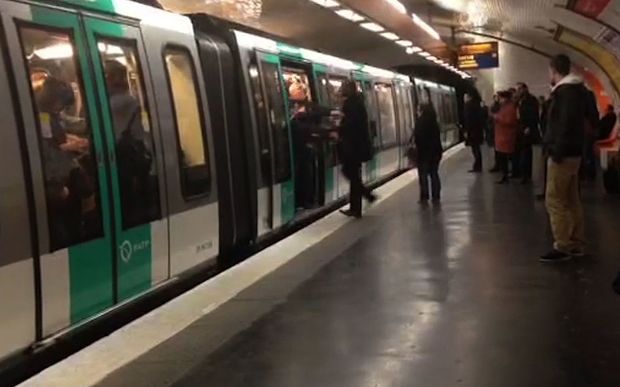 A video grab shows Chelsea fans packed onto a Paris Metro train pushing a passenger to prevent him from boarding. Photo: AFP

It shows a group of men chanting "Chelsea, Chelsea!" standing in a packed train waiting at a platform.

The unidentified black man repeatedly tries to squeeze into the carriage and they aggressively push him back. The film then cuts to the men chanting: "We're racist, we're racist, and that's the way we like it!"

In a statement on Wednesday, Chelsea said the incident was "abhorrent" and had "no place in football or society".

"We will support any criminal action against those involved, and should evidence point to involvement of Chelsea season-ticket holders or members, the club will take the strongest possible action against them, including banning orders," the club added.

The footage was obtained by The Guardian newspaper which reported that the incident happened at Richelieu-Drouot station in the centre of the French capital on Tuesday evening.

The footage was filmed by Paul Nolan, a Briton living in Paris. He told the BBC it was an "ugly scene" and "very aggressive".

French state prosecutors announced that they have opened an investigation into "deliberate racial violence on public transport".

London police said they would help their French counterparts with their inquiries.

"We will examine the footage with a view to seeing if we can apply for football banning orders, preventing people from travelling from future matches," New Scotland Yard said in a statement.

European football's governing body UEFA said it was "appalled" by the fans' behaviour, but said that because the incident had occurred outside the stadium, it was "outside UEFA's remit" to act upon it.

Sepp Blatter, president of world governing body FIFA, wrote on Twitter: "I also condemn the actions of a small group of Chelsea fans in Paris. There is no place for racism in football!"

England's Football Association said: "The FA, like the club, completely condemn such disgraceful behaviour, which is a criminal offence, and those responsible should face the strongest possible punishment."