Research is now suggesting something dog-lovers have long suspected - man's best friend can tell the difference between our happy and angry faces. 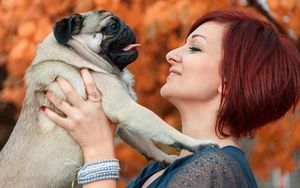 Scientists at the Messerli Research Institute's Clever Dog Lab in Vienna trained dogs to associate pictures of happy or angry faces with a reward.

In a subsequent test, the scientists showed the dogs images of human faces they had not seen in their training.

This suggested that dogs could spot the difference between the expressions.

This study, published in the journal Current Biology, was part of a larger project studying how humans and their canine companions interact.

"The main focus [of our research] is the big question of communication," lead researcher Prof Ludwig Huber said.

"How is it that dogs are so adapted to humans, and what's happened during the process of domestication?"

The scientists repeatedly showed 20 dogs half pictures - either the lower mouth region or the upper eye area - of happy or angry human faces.

Half the dogs received a treat when they touched an angry face with their nose. The other half were rewarded for touching happy faces.

Just over half the dogs learned the task well enough to be tested, and there were then a number of different tests to find out if they could tell the difference solely on the basis of facial expression.

"In another, we showed them different parts of the faces."

Showing dogs the opposite half of the face to the half they had learned to recognise in their training, showed they could "transfer their knowledge" of human facial expressions

"So, for example, in the training, they see the mouth region of the happy face," said Prof Huber, "and they associate that with what the eyes would look like."

Dr Kun Guo, a psychologist and expert in human-animal interaction from the University of Lincoln, said: "Showing dogs only half of the face and then the other half separately means they can't rely on the shape of the eyes or the mouth - they must have some sort of template in their mind.

"So it looks like they can really discriminate between happy and angry."

But, he added, this did not show that dogs understood the meaning of those emotional expressions.

Prof Huber agreed but added that the dogs that had had to touch the angry face to be rewarded, in the training, had taken three times as long to learn the task.

"It seems as if they don't like to touch an angry face," he said.

"So here we have some suggestive evidence that they interpret those pictures, and maybe they really understand an angry face to be something they don't like."