Victoria Police now believe they know the identity of the man whose body parts, including an arm with a distinctive tattoo of a devil holding a pitch fork, were found in the Maribyrnong River in Melbourne. 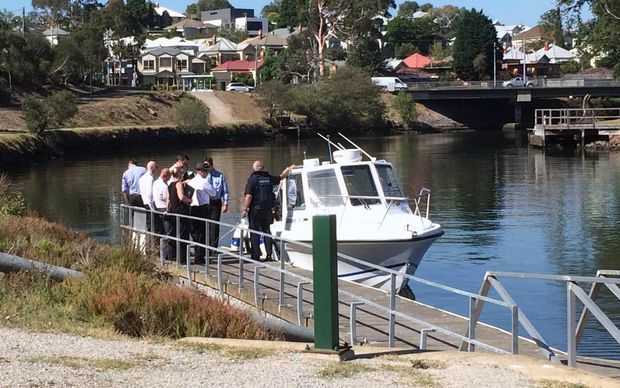 Detectives searching for body parts in a Melbourne river on Friday after a severed arm was found. Photo: AAP / Caitlin Guilfoyle

Police have been searching the river since Thursday when a human arm was spotted floating near Moonee Ponds.

More remains were found on Friday, Saturday and again today.

This morning a woman who was rowing on the river noticed a plastic bag in the rocks on the side of the river, looked inside and found what she believed to be human remains.

She then called police.

Detective Inspector Mick Hughes said they believed the victim was a man in his late 30s who lived on the fringes of Melbourne's CBD.

The man's identity would not be released until it could be forensically confirmed, police said.

"He was identified, shall we say, by a close family relative who saw the tattoo and contacted police. In fact [he] went into the North Melbourne police station," Detective Inspector Hughes said.

"Until we confirm who he is we won't release his name. We will release it as soon as we're able because we want to know his associates."

The man had not been reported missing and his family last spoke to him around Christmas, which was not unusual.

Detective Inspector Hughes said having a family connection would make it easier for police to confirm the man's identity through DNA.

"We think we're on the right track. Everything points to it. [With] the description by the relative, we're all but sure it's him."

In the meantime police will continue to search the river.

"We still believe there will be more body parts found," he said.

Detective Inspector Hughes said the response from the public had been tremendous.

"The response from the public has been tremendous," Detective Inspector Mick Hughes said.

"Despite the confronting nature of these discoveries, people have acted quickly and contacted police.

"The information provided has enabled investigators to act quickly and secure the items proving crucial in the investigation."

Police are confident the remains relate to only one person.