Imagine being harnessed to a total stranger six times a day, for six days out of every week.

Consider managing this scenario at 14,000 feet in an aircraft with no seatbelts and designed to be jumped out of. 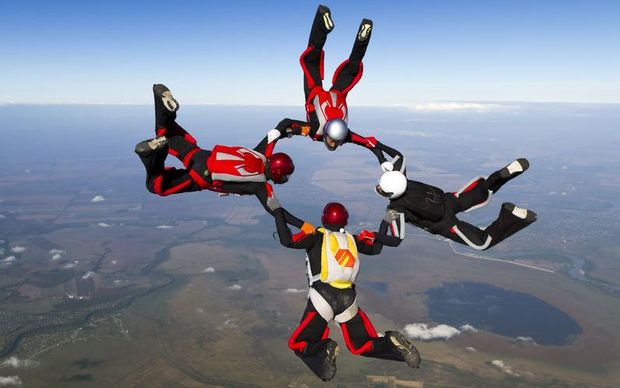 Mr Hansen spent his early years experiencing the world with a bird's-eye view.

A frequent passenger with his pilot father, it was through the window of an aircraft that he considered an aviation career.

"I used to go up with him when I was really young, flying around," Mr Hansen said.

"I used to love looking out, down and out of the aeroplane, and then I found out you could actually jump out so, being young and stupid, I wanted to try it."

Mr Hansen jumped from a plane for the very first time over the Thames Valley at just 14 years of age, and has not stopped since.

On any given day, Mr Hansen could have three to 12 customers strapped to him, making for a full 12-hour day of skydiving.

He said he is typically met with one of two responses when he tells people what he does for a living.

"They're either a little shocked [but] usually happy about it, but you also get the people who would never do it, and they definitely let you know."

It was America that provided Mr Hansen with his most memorable tandem jump to date after he was roped into a tandem sky-dive with a college basketball team's mascot dressed in an eagle suit.

He had this massive [eagle] head that was huge," Mr Hansen said.

"So, when we got out of the aeroplane, because of how big everything was, it threw me onto my back.

"I had to fight that and that was pretty interesting!"

Experiencing exhilarating speed with strangers who are new to the sport is one of Mr Hansen's favourite aspects.

Sky-diving is the kind of experience he said very few people regret.

"It's just awe-inspiring and it's not until they jump out of the aeroplane that they realise how good it is," he said.

But diving through the sky, reaching speeds of around 200 kms per hour, has not been without the occasional bout of motion sickness for a few of Mr Hansen's customers.

"I wouldn't say it's a daily or weekly occurrence but it happens from time to time - the Lamborgreenie!" he laughed.

"A lot of the reason why people will pass out, or vomit or feel ill is they haven't had anything for breakfast or lunch."

Mr Hansen said the weather posed the most nerve-wracking variable that could spur moments of doubt within him at times.

"It's on a day-by-day basis. If it's really windy and we get the call 'are you happy to jump' and I think no, we'll land the airplane and wait for the wind to stop," he explained.

When asked about the inherent risks of the sport, he said he thought most skydivers maintained an open mind in their philosophy on life and death.

"I've lost two friends in the US and another friend in Switzerland base-jumping. That's pretty tough.

"It's not really something I think about or I'm too worried about either. It's pretty safe and straightforward up there," he said.

Looking back on his career to date after 10,000 jumps, Mr Hansen said the adrenaline was still there every time.

"It's a tough one for a lot of people because they think falling out of an aeroplane is the most dangerous thing in the world when really, it's not," he said.

"It's not all 'fingers crossed and I hope this works'. Technology is out there and it's amazing technology that we have.

"[You] just need to get out there and try it.

"It will open your mind and blow you away. You'll never look at the sky the same."