The death toll from a plane crash in Taiwan has risen to at least 31. 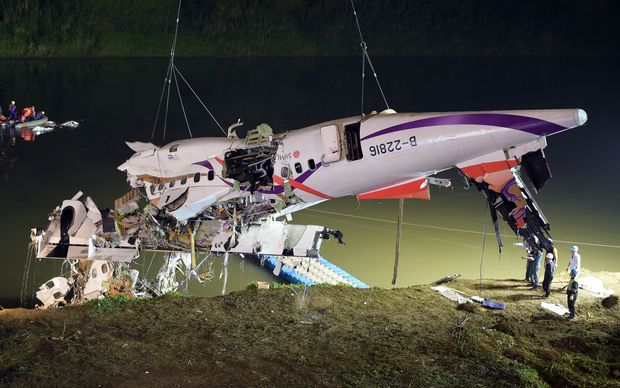 Rescuers lift the wreckage of the TransAsia ATR 72-600 out of the Keelung river at New Taipei City on February 4, 2015. Photo: AFP

The TransAsia Airways plane, with 58 passengers and crew, clipped a highway bridge on takeoff, before hitting the Keelung River in the capital Taipei.

The BBC reported 15 people survived but 12 people were still missing.

Television footage showed some passengers wading clear of the sunken wreckage and a toddler being pulled out alive by rescuers.

Rescuers on boats have cut the plane open to get to passengers believed to still be trapped in the front section of the fusilage.

As night fell, a crane was used to lift the wreckage on to the bank.

The death toll was expected to rise as rescue teams searched the fuselage and the river for the missing passengers.

Tim Culpin of Bloomberg News was at the scene and said the plane appeared to malfunction shortly after takeoff.

"They have recovered the two black boxes but it will take them a few days to find out what had happened.

"Now based on the situation of where the crash happened, the highway is about 100 feet high, and three or four kilometres off from where the aircraft took off.

"So it clearly didn't gain a lot of altitude before it plunged back to earth and into the river," he said.