A group of women have staged a protest outside a luxury hotel in central London to protest against its attitude towards women who breastfeed their children in public. 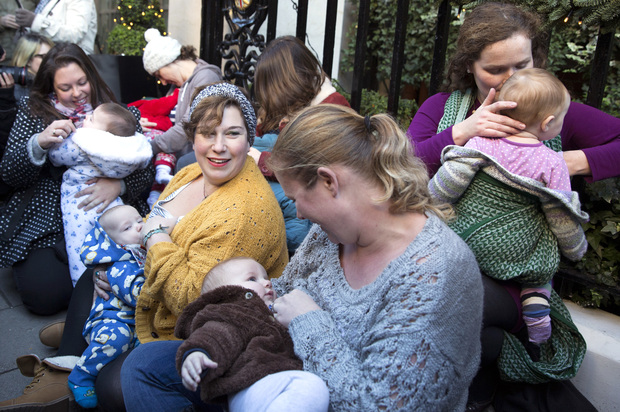 Demonstrators feed their babies during a protest in support of breastfeeding in public outside Claridge's hotel in London. Photo: REUTERS

The mass nurse-in outside Claridge's followed an incident last week when a waiter asked a woman in the hotel's restaurant to cover her baby with a large napkin while she was nursing.

The woman, Louise Burns, was breastfeeding her three-month-old daughter during afternoon tea at the hotel.

The demonstration is being organised by Free to Feed, a lobby group that campaigns for the normalisation of public breastfeeding.

A mother at the protest, Emily Slough, said one of the aims of the protest was to promote awareness to other mothers.

"It's really important to get the message across, and to let breastfeeding mothers know that they are protected by law to breastfeed where they wish to breastfeed, and that they should do so without any kind of hassle or trouble from anybody else."

Ms Burns' treatment has prompted a debate over the rights and wrongs of breastfeeding in public, with UK Prime Minister David Cameron supporting women's rights to do so.

Equality laws in Britain state that treating a woman unfavourably when she is breastfeeding amounts to sex discrimination.

About 15 women and their babies gathered outside the hotel to speak out on the issue, with one carrying a banner saying: "That's what breasts are for, stupid."

Claridge's said while it embraced breastfeeding, it asked that mothers be discreet towards other guests.