A senior adviser to the Kenyan president says the slaughter of 28 people on a bus by the Somali militant Islamist group al-Shabab is intended to create a religious war in the country. 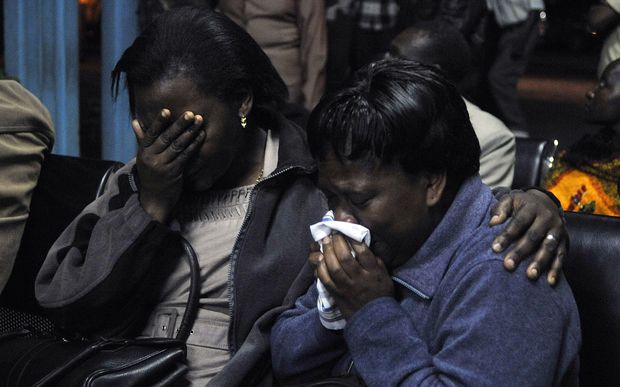 Family members and relatives outside the Nairobi morgue where the bodies of the victims were taken. Photo: AFP

The adviser, Abdikadir Mohammed, is calling on Kenyans of all faiths to stand together against what he calls heinous crimes.

The Somalia-based Islamist group has carried out numerous attacks across Kenya since 2011.

The bus was travelling to the capital, Nairobi, when it was stopped in Mandera county, not far from the border with Somalia.

Gunmen separated out non-Muslims by asking passengers to read from the Koran, officials and witnesses said. Those who failed were then shot in the head.

Kenya's Red Cross confirmed that 28 of the 60 passengers on the bus were killed, 19 men and nine women.

One survivor, Douglas Ochwodho, told how he was singled out to be killed but was not shot and then pretended to be dead among the bodies.

"We have had a lot of the Muslim leaders come out today [Saturday] and strongly condemn this and call on Kenyans of all faiths and creeds to stand together against these heinous crimes and criminals."

Al-Shabab said the attack was in retaliation for recent killings of Muslims by the Kenyan security forces in the coastal town of Mombasa.

The Kenyan authorities said they had begun to identify the killers and would bring them to justice.

The interior ministry said a camp belonging to the attackers had been destroyed by Kenyan military helicopters and jets, with "many killed".