The Turkish foreign minister has said his country will allow Iraqi Kurdish Peshmerga fighters to cross into Syria to help Kurds in their fight for Kobane against Islamic State (IS). 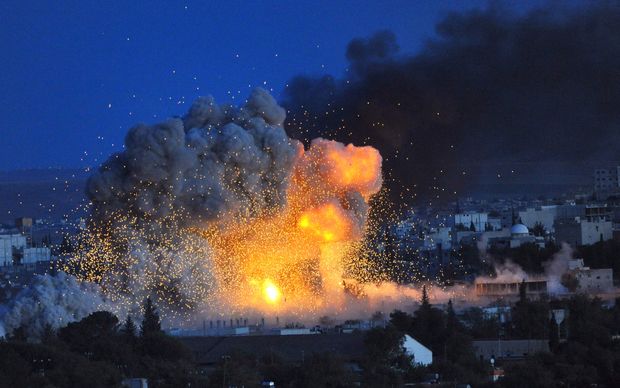 Smoke and flames rise following an explosion in the Syrian town of Kobane, seen from southeastern Turkey. Photo: AFP

In what is being seen as a policy reversal, Turkey's foreign minister Mevlut Cavusoglu said talks on the subject were continuing, the BBC reported.

The announcement came shortly after the US carried out air drops of weapons to the town's Kurdish fighters.

Meanwhile the US-led coalition has carried out its first air strike of the day, against IS positions in the south-west of Kobane.

US Central Command later confirmed six strikes near Kobane over Sunday and Monday, as well as six in Iraq near Falluja and Baiji involving French and UK aircraft.

Kobane has been largely quiet for the second day running, with Kurdish fighters apparently having driven IS militants from most of the town.

But the Turkish government decision is nevertheless a major boost for the defenders' morale and soon for their fighting capability.

Turkey, faced with a long insurgency by its own Kurds, has up till now barred access for Kurdish fighters to Syria.

The government in Ankara fought a decades-long conflict with the PKK, which it brands as a terrorist organisation. The PKK campaigns for greater autonomy in Turkey and has links with the Syrian Kurds defending Kobane.

Turkey, the BBC said, sees Iraq's Kurds as more reliable and less threatening, coming from a semi-autonomous state with which it can do business.