Three car bombs have exploded in mainly Shia Muslim areas of the Iraqi capital Baghdad, killing at least 38 people, as fighting continues in the north. 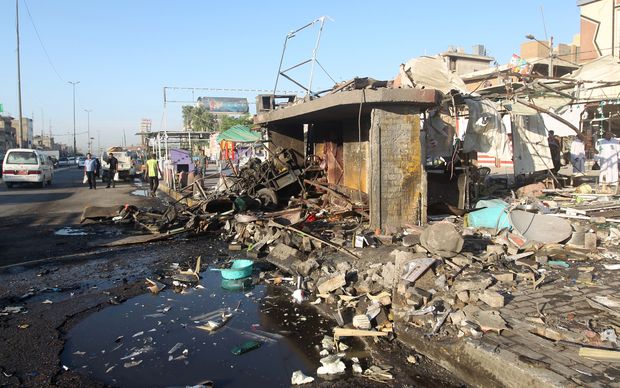 The aftermath of an explosion after a car bomb attack in the mostly Shia Sadr City district of Baghdad. Photo: AFP

Many other people were injured by the three blasts. It is not known who carried out the attacks.

At least 14 people died in violence elsewhere in Iraq on Saturday.

The advance of Islamic State (IS) militants and their Sunni Muslim allies has increased tension between the country's Shia and Sunni communities.

A suicide car bomb exploded at a security checkpoint in the northern Kadhimiya area of the capital, killing at least 11 people, officials say. In another incident a suicide bomber killed at least seven people in a market in Meshahda near Baghdad.

Four injured soldiers were killed when their ambulance was attacked in a "friendly fire" incident near Baquba. Police say Shia militia volunteers opened fire on their ambulance, thinking it was being used by IS fighters to attack their position.

US and other aircraft from the international coalition carried out air strikes on IS targets inside Iraq as well as dropping supplies to Iraqi government forces at Baiji, where Iraq's biggest oil refinery is located.

IS militants have taken control of large sections of northern and western Iraq in recent months.