At least 32 people have died in a stampede at a Hindu religious festival in Bihar in northern India, officials say. 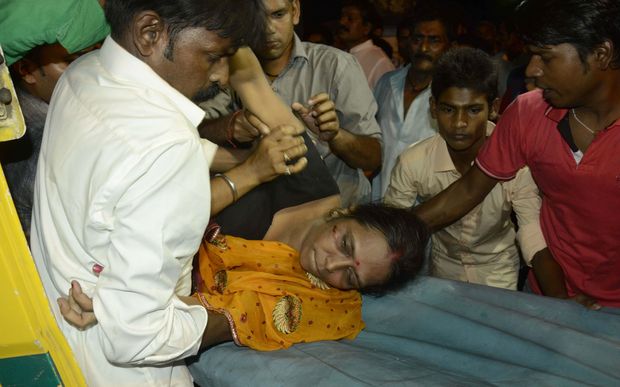 Many women and children were among the crowds gathered to celebrate the Hindu festival. Photo: AFP

Many of those killed in the incident in the state capital of Patna were women and children, Bihar chief secretary Anjani Kumar Singh told the BBC.

He said 24 others were taken to the state hospital with injuries.

The stampede broke out in Patna's Gandhi Maidan, as celebrations for the festival of Dussehra were being held.

It is not yet clear what caused the incident, with reports suggesting it occurred in a narrow road as crowds dispersed from the outdoor venue.

Eyewitnesses quoted by India's NDTV say the stampede started after word spread through the crowd that an electrical wire had snapped off and fallen down.

Local journalist Niraj Sahay, who was at the scene, says an eyewitness told him that only one of the exits was opened for people to leave.

The stampede started when some wires fell on the crowd, which people thought were electricity wires, he tells BBC Hindi.

In August 10 people were killed in another stampede at the Hindu festival of Somvati Amavasya in central India.

In October 2013 some 91 pilgrims, mostly women and children, were killed in a stampede at a Hindu festival near the Ratangarh temple in Madhya Pradesh state.