Political and religious leaders have been reacting to the death of former Democratic Unionist Party leader and first minister Ian Paisley. 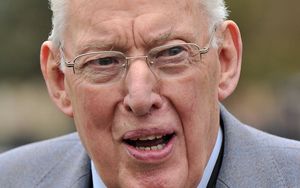 UK Prime Minister David Cameron said Mr Paisley, 88, had been "one of the most forceful and instantly recognisable characters in British politics".

His successor, Peter Robinson, said he was influential and Sinn Féin's Martin McGuinness said he had lost a friend.

His wife, Baroness Eileen Paisley, said the family was heartbroken.

Mr Paisley, who was 88, moved from a political "never man" to Northern Ireland's first minister.

He ended up leading a power-sharing executive at Stormont - although he had supported the strike to bring one down 30 years earlier.

In her statement yesterday, Baroness Paisley said: "Although ours is the grand hope of reunion, naturally as a family, we are heartbroken.

"We loved him and he adored us and our earthly lives are forever changed."

She said that his funeral would be private.

Mr Cameron said said Mr Paisley was a controversial politician but his contribution in his later years to stability in Northern Ireland was "huge".

"In particular, his decision to take his party into government with Sinn Féin in 2007 required great courage and leadership, for which everyone in these islands should be grateful," Mr Cameron said.

"Ian Paisley will be remembered by many as the 'Big Man' of Northern Ireland politics. He will be greatly missed."