Forty-five Fijian United Nations peacekeepers who were seized in the Golan Heights in Syria two weeks ago have been released and are in high spirits, their prime minister says. 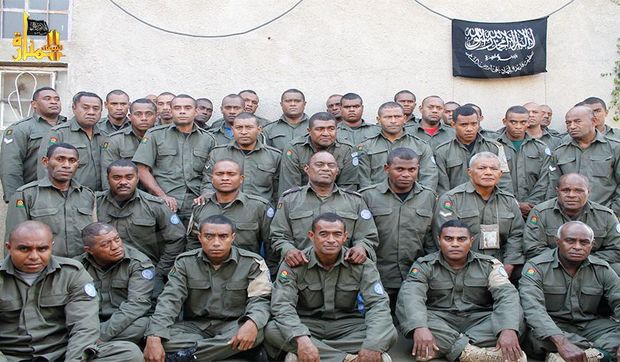 The soldiers had been held for more than two weeks by rebels from al-Nusra Front, which has links to al-Qaeda.

They were driven to a crossing and into Israeli-held territory where they were freed, the BBC reported.

Fijian Prime Minister Frank Bainimarama said the men were safely back in a UN compound and were in high spirits.

All were healthy and should soon be in contact with their families, he said.

Mr Bainimarama thanked those who had a hand in securing their safe release, including the UN negotiators and Fiji's own team in New York and Suva.

Fiji correspondent Ricardo Morris said a Fijian army commander had told a briefing in Suva the freed men were happy to be in Israel.

"They were having a kava session and enjoying some singing. He said they were in high spirits and they were well treated," he said.

Foreign Affairs Minister Murray McCully welcomed their safe release and said it was an excellent outcome for them and their friends and family in Fiji.

He also praised the work of the UN and others to secure their safe release.

The Fijians are undergoing medical and psychological tests, following their ordeal.