A British healthcare worker who contracted the Ebola virus in Sierra Leone has arrived back in Britain on a Royal Air Force plane, the United Kingdom's Department of Health says. 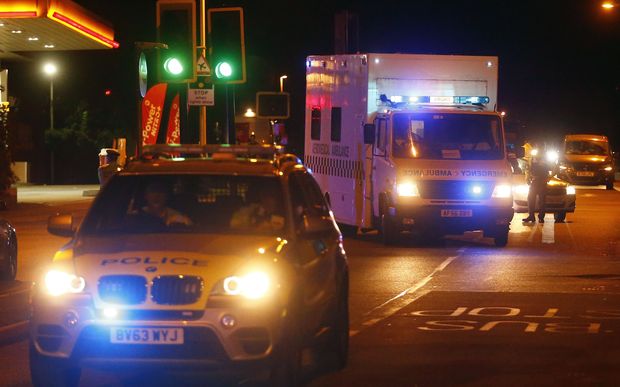 Police escort an RAF ambulance carrying a British man infected with the Ebola virus at Northolt air base outside London. Photo: Reuters

The healthcare worker was flown to London's RAF Northolt in a specially-equipped C-17 aircraft and then transported to an isolation unit at the Royal Free Hospital in north London, the BBC reports.

The Briton is "not currently seriously unwell", a department spokesman said.

Health officials have stressed the risk to Britain remains "very low" and said the decision to return the patient home was taken following "clinical advice".

Prof John Watson, Department of Health deputy chief medical officer, said they would be taken in a specially-adapted ambulance to a high level isolation unit - the only unit of its kind in Britain.

It is the first confirmed case of a Briton contracting the virus during the current outbreak, in which 1427 people have died.

Meanwhile, the Democratic Republic of Congo has confirmed its first two cases this year of ebola but said they are unrelated to the epidemic ravaging West Africa.

The country's health authorities said the confirmation marks the seventh outbreak of the virus in the republic, where it was first identified in 1976 near the Ebola River.

But they said the new cases have no link to the epidemic in Guinea, Liberia, Sierra Leone and Nigeria, where the death toll has risen to 1427.

A new outbreak of Ebola has been detected in the Democratic Republic of Congo - the country where ebola virus was first discovered.

The Congo's health minister said the latest cases are a strain of Ebola not linked to the current epidemic in the countries of Liberia, Sierra Leone, Guinea and Nigeria.

So far there are only two confirmed cases but he expects the real number of infections to be higher.

The World Health Organisation estimates 2615 people in West Africa have been infected with Ebola since March.

The virus, for which there is no cure, is spread between humans through direct contact with infected bloodily fluids. It is one of the world's deadliest diseases, with up to 90 percent of cases resulting in death.

A statement from Sierra Leone's health ministry said the Briton had been volunteering at a clinic in the Kenema district of the country.

Sidie Yayah Tunis, director of communications at the health ministry, said the patient had been flown out of the country's main airport in the town of Lungi on Sunday.

The move was a "slap in the face" for people living in West Africa as it highlighted how much better health care was in countries such as Britain and the United States, a BBC correspondent said.

Two Americans recovered from Ebola and were last week discharged from hospital, having been flown to the US and given an experimental drug.

Dr Kent Brantly, 33, and Nancy Writebol, 59, were flown from Liberia, in West Africa, to Atlanta, in the US, where they received an experimental treatment known as ZMapp.

Officials in Liberia have also said three medical staff have shown signs of improvement after taking the drug.