Palestinian President Mahmoud Abbas has called on Israel and Hamas to attend fresh talks in Egypt. 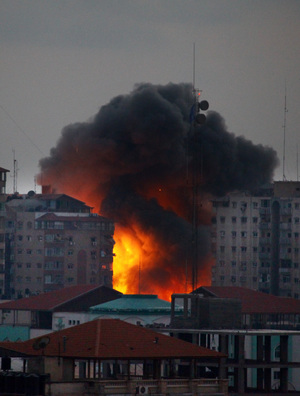 A ball of fire rises from a building after an Israeli air strike in Gaza City. Photo: AFP

The Egyptian foreign ministry said it was ready to mediate and called for an immediate ceasefire.

The BBC reports a previous Egyptian-brokered truce collapsed on Tuesday. Health officials said at least 10 Gazans were killed on Saturday, including two children.

Another 22 were hurt as a 12-storey block, said by Israel to be a Hamas command centre, was demolished.

More than 2,090 Palestinians - mostly civilians - and 67 Israelis have been killed in recent weeks.

Most of the dead on the Israeli side have been soldiers. A Thai national in the country was also killed by rocket fire early on in the six-week-old conflict.

Israel says that since the latest ceasefire ended, over 525 rockets have been fired into Israel from Gaza, with 69 of them intercepted by its Iron Dome anti-missile defence system.

In a separate development, more than 300 Jewish survivors of the Holocaust and descendants of survivors have issued a public statement condemning Israel's action in Gaza.

The Israel Defence Forces (IDF) said it had carried out around 60 air strikes over Gaza on Saturday, while more than 70 rockets and mortar rounds fired from Gaza struck Israel.